You are here: Home / Milkweed / Monarch Butterfly Life Cycle: A Metamorphosis ~ Part One ~ The Capable Caterpillar
The mammouth Monarch Butterfly migration is underway.
Sightings are reported along rivers and hillsides, fields and meadows,
gardens and parks by lucky viewers seeing hundreds of these skilled navigators flying south.
Here at Flower Hill Farm there are numerous fresh Monarchs floating about the gardens each day.
I have counted up to thirty on one Buddleia,
while several are scattered feeding on Ironweed, Phlox and Liatris.
Yesterday I noted the pink florets of Sedum ‘Autumn Joy’
dotted with both Monarch and Painted Lady butterflies along with hundreds of honey bees.
Many perfect days have passed where I might be found walking out into the gardens
with newly emerged Monarch butterflies
. . . happily observing as each gingerly takes their impressive first flight.
Each departure unique, joyous and somewhat staggering
as I had known these tiny magnificent creatures since they were
but even more minuscule eggs.
Which came first . . .  the butterfly or the egg?
The Monarch Butterfly Metamorphosis begins with an egg and then the capable caterpillar and its miraculous feat of nurturing a chrysalis within. 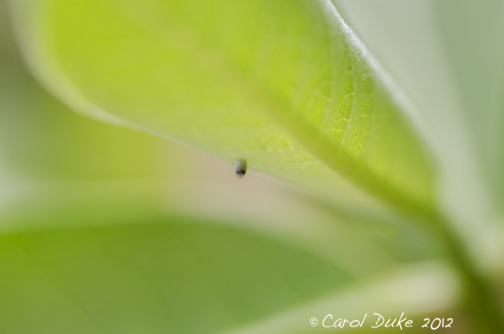 First there is an egg
but how did it appear?
A female butterfly
fastened it to its host Milkweed leaf . . .
not needing to tend her young she flies away
with many more eggs to oviposit. 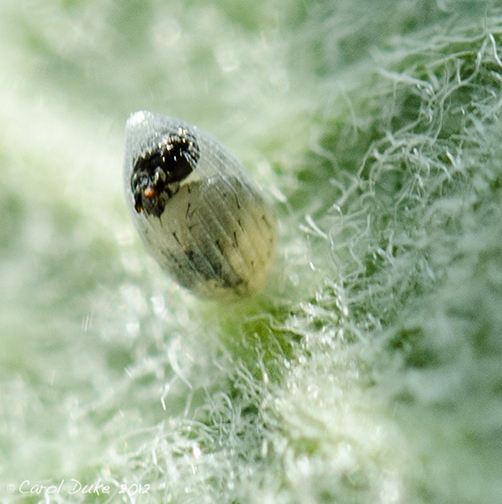 A day or two goes by and a teeny black head stirs within
independently chewing its way out into its hairy leafy world. 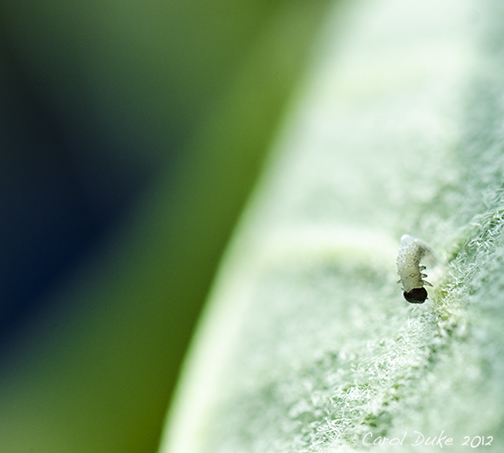 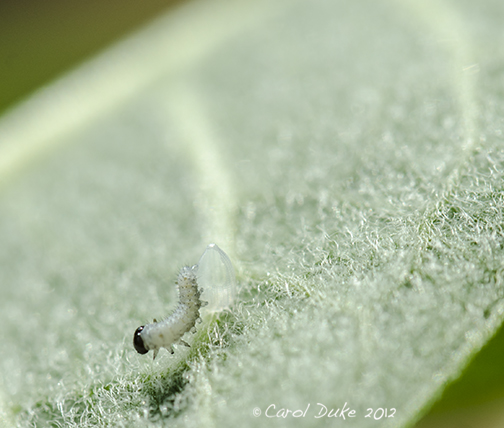 Reading caterpillar body intelligence . . . this one seems to say “Boy, this feels good.”
The egg capsule was a very tight fit. 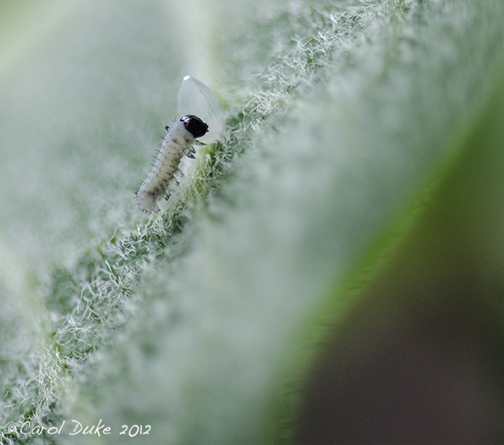 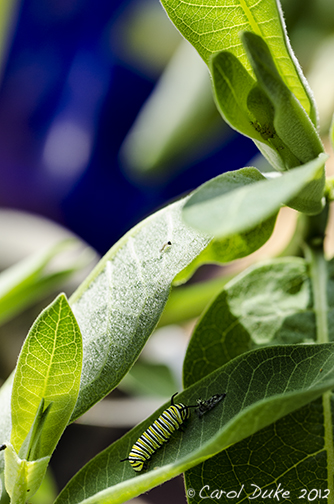 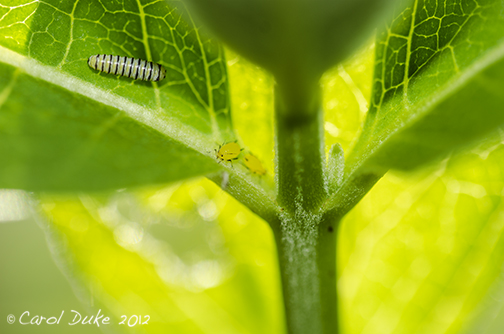 Second instar compared in size to Milkweed or Oleander aphids. 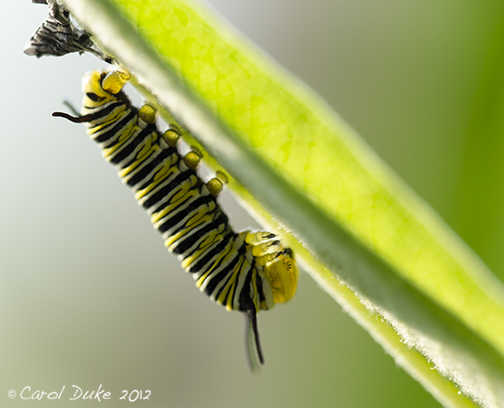 Molting along the way and turning to eat their old clear black-striped skin in each new stage.
The ocelli or compound eye can be seen on the fourth instar above.
Too tiny to be seen an antenna is near each eye
. . . not to be confused by the two longer tentacles on the thorax and abdomen.
Its now clear head capsule will have black stripes soon too
forming a protective covering for the yellow head. 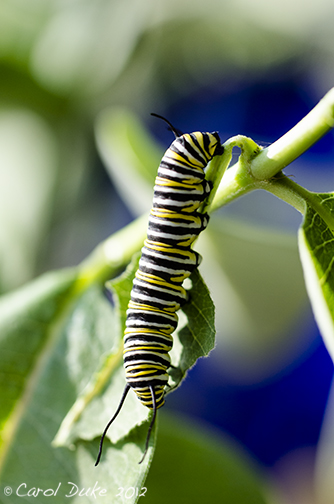 Fifth instars pausing between chomps as growth inside
forms transitional templates.
It is nearly time to unveil its hidden self. 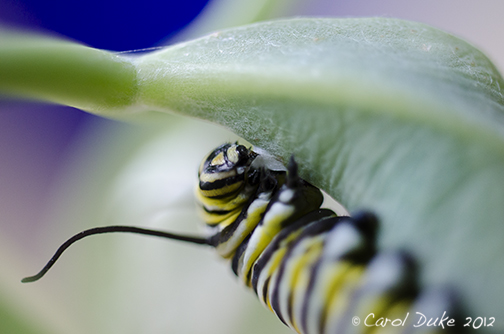 First the caterpillar can be seen securing a silk mat and knob
with the help of its singular spinneret . . .
looking closely you can see it.
Expressive tentative tentacles take part in the drama of the act. 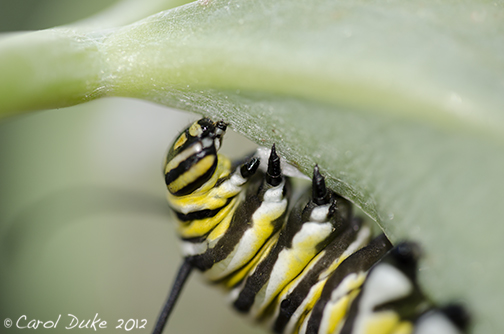 Meticulously extending out from the silk knob
the fifth instar pulls silk threads creating an anchor mat,
while true legs hold on to form the silk button its life will later depend on. 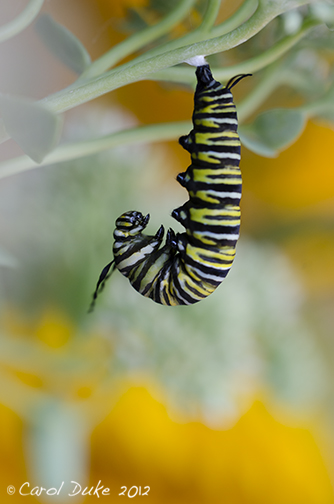 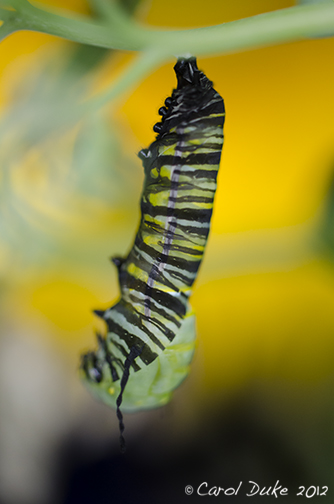 Stretching and splitting skin behind the head giving birth to itself. 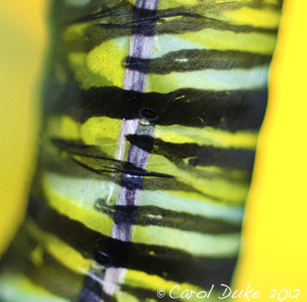 The caterpillar tracheae is a lovely lavender purple pulling up with the clear black-striped skin.
The chrysalis has its own spiracles or air holes and tracheae allowing it to breathe.
I find this palette inspiring for a painting. 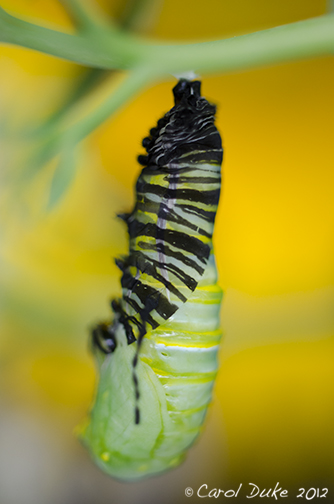 Amazing to see what was already within the caterpillar. 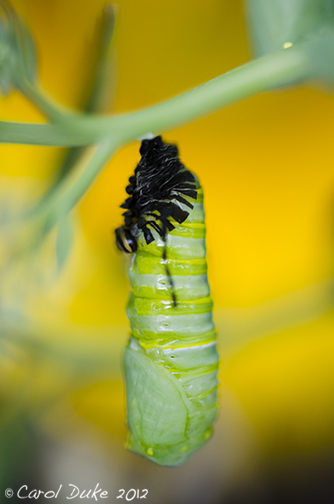 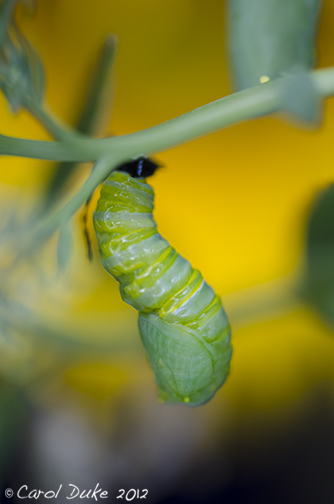 Twitching and twisting, the forming chrysalis works the old skin up
and performs the amazing act of pulling out its shinny black cremaster,
feeling its way over the pile of skin . . .  then
the ebony barbed appendage hooks into the carefully formed silk knob. 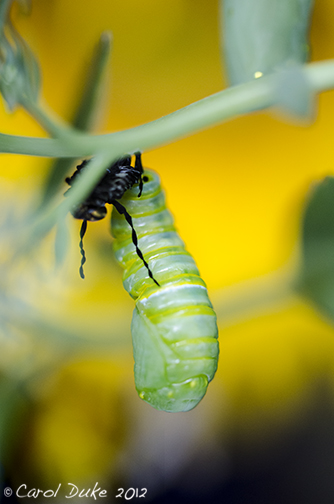 The old skin falls away looking like a dried up fly. 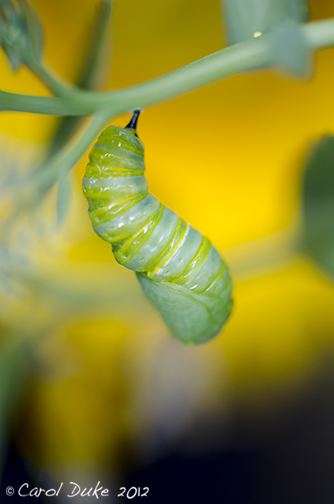 More twisting
. . .  for the certainty of hundreds of hooks
being securely fastened within the silk. 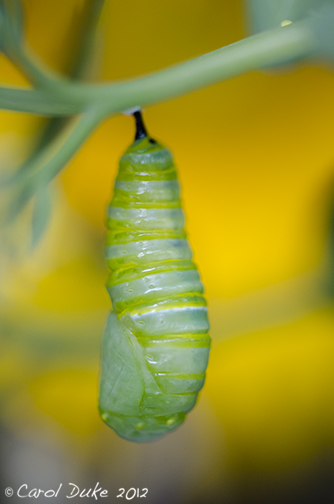 Now . . . the shrinking act begins and all that resembles a caterpillar disappears. 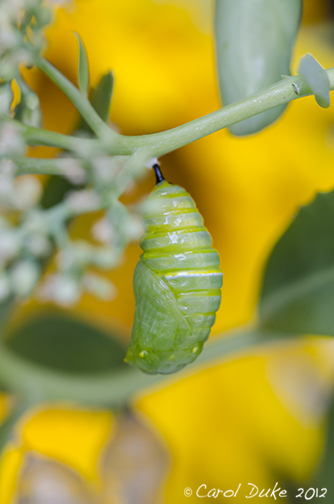 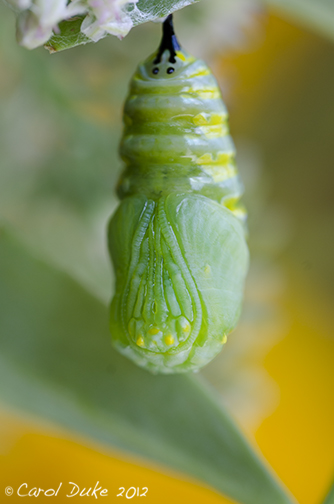 Viridescent fluid butterfly template
wings, antennae, legs and proboscis
all to be seen then disappearing into jade green.
A chrysalis is born. 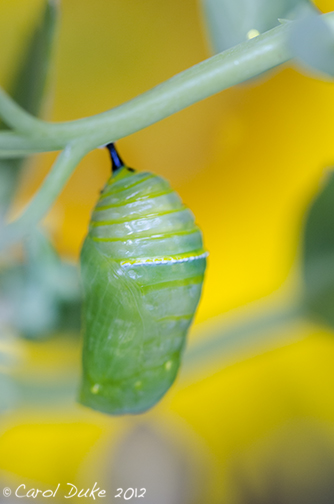 A pearl necklace appears reminding all of the pure white toxic milky juice of milkweed. 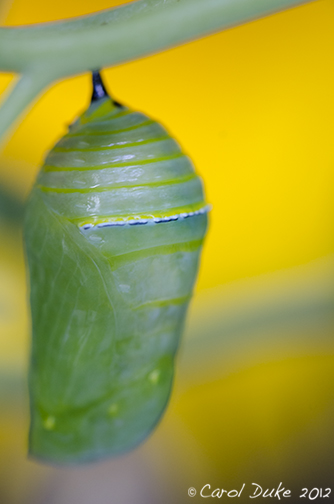 The capable caterpillar is not forgotten but painted here in a design
of white, yellow and black. What are the colors found in the caterpillar?
A token of appreciation for all the many changes it had to go through? 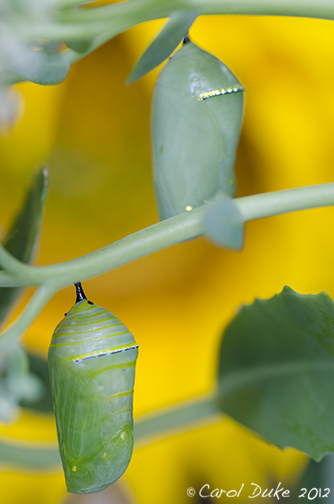 Later the necklace appears golden . . . still the colors of the caterpillar shine.
Within a few hours a clear casing will harden to protect the chrysalis.
As I write this first installment to my
‘Monarch Butterfly Life Cycle: A Metamorphosis’ today,
two . . . now three Monarch butterflies are emerging
within a bouquet atop a table near the open French doors.
Oh, I just noticed the one that became like a tassel on a silk pillow in a chair next to the table too.
I see a fifth on a walking Iris plant near a cheery bouquet of sunflowers both on the same table.
So, five monarch butterflies emerge while I write about their beginning.
A caterpillar just completed spinning its silk knob and finally let go to dangle in a J
as all the butterflies hang like wet laundry drying their stained glass like wings.
Later, I will walk out into the gardens to release all these magical butterflies
before heading off to the Berkshires and the ‘Temple of Music’
to hear chamber music at the South Mountain Concerts.
Life can be enchanting here in Western Massachusetts.
Next installment will be more on the captivating Chrysalis.