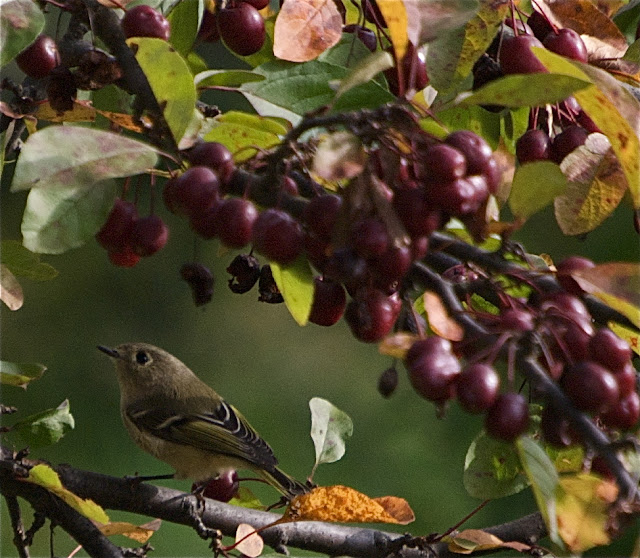 The tiny birds I am featuring in this post are not much bigger than a hummingbird. Ruby-crowned Kinglets (Regulus calendula) are only about 3 or 4 inches in size and are another leaf gleaner constantly moving about and flicking their wings. 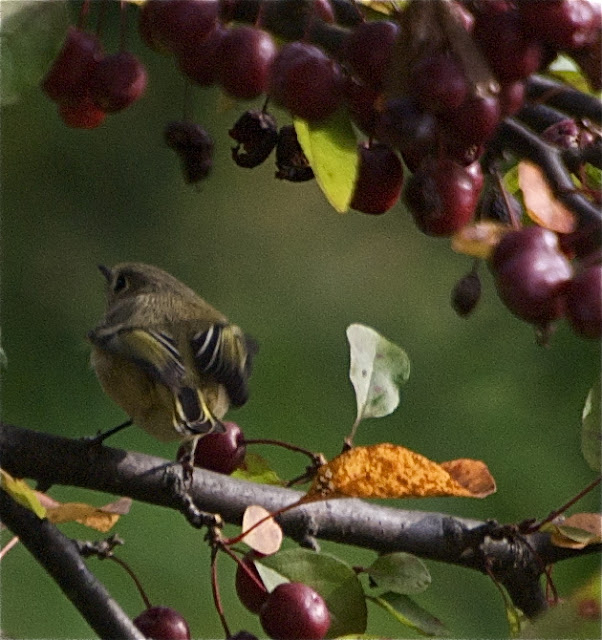 The Ruby-crown Kinglet’s crown is reserved for only special occasions, determined so by the male. I cannot be sure if this is a male or female. I did once come face to face with one of these teeny birds in an apple tree . . . we were eye to eye and he did reveal his ruby-red crown to me. I was standing on the ground, whereas he was right on the edge of a branch that nearly touched my nose. That image remains only in my head stored under enchanting encounters with wildlife. 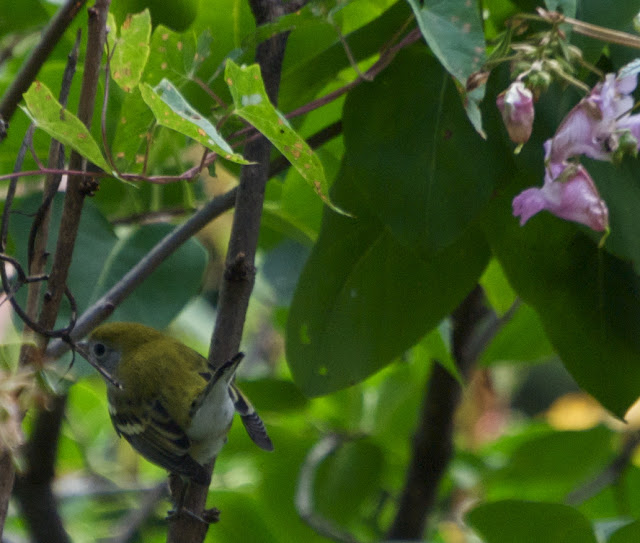 The upper body of the Ruby-crowned Kinglet is a rather soft olive green, except when light plays with their feathers. The entire under body is a buff-white and you can clearly see the wing bars on this small songbird. The female will lay many eggs, sometimes up to eleven, that together weigh as much or more than she does. 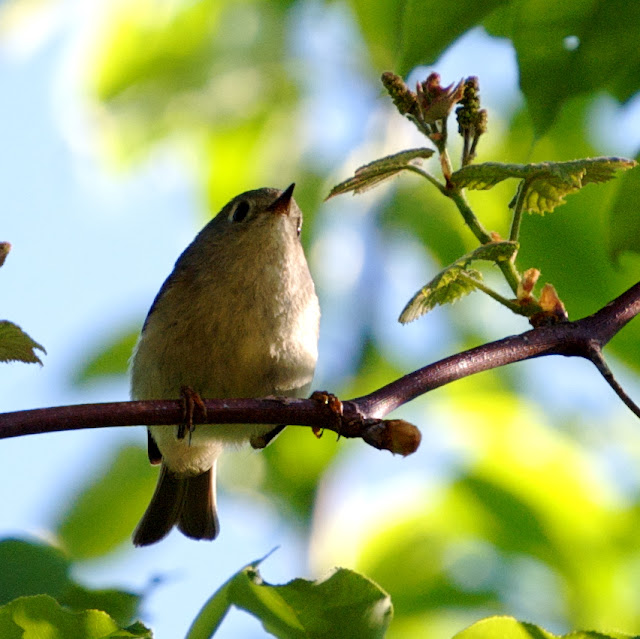 I would not know if this were a Ruby-crowned or Golden-crowned Kinglet perched on a grape vine except for the slight yet distinct eye ring, absent any white eyebrow or black line through the eye. Both birds have forked short tails. The songs of these very small passerine birds vary as much as their markings. The Ruby-crowned is my favorite with its joyful, short, sweet phrases overlapping onto one another. I highly recommend your visiting All About Birds to hear for yourself their description ” a jumble of notes, starting with two or three high “tsees,” followed by five or six lower “tur” notes, and ending with repeated “tee-da-lett” phrases. Call a quick “di-dit.” The Golden-crown Kinglet sings out a series of high pitched “tsee, tsee, tsees.” 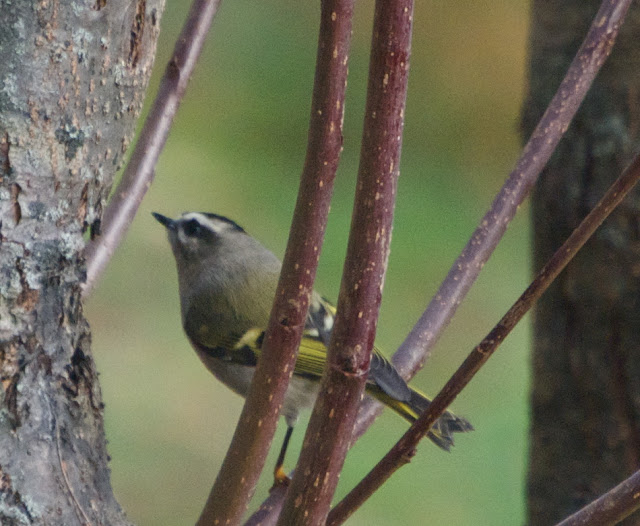 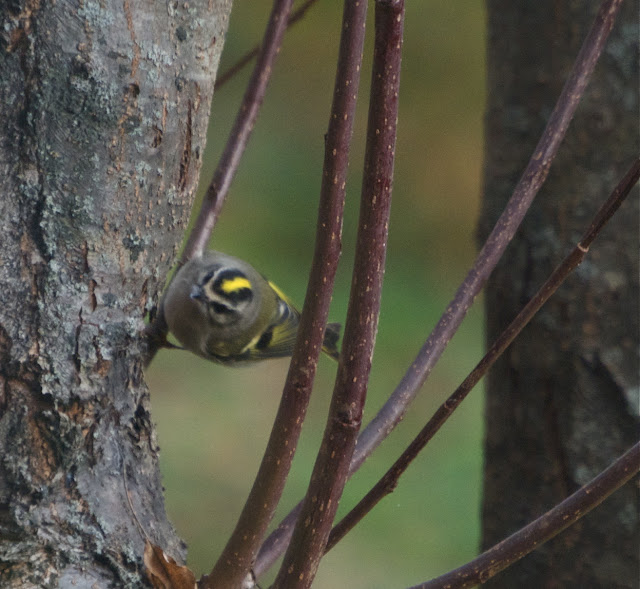 The golden-yellow crown of the Golden-crowned Kinglet is framed by bold black lines. Somewhere within the bright crest is a hidden hint of orange, the male will only share when he feels up to it. The Golden-crown Kinglets will raise two broods in the short summer season . The female will continue to care for her first young for a day or two after they leave the nest and then turn the parenting over to her mate. She will then begin to lay a new batch of eggs, leaving the male to feed their young, himself and hopefully not forgetting to bring her a few bites of insects, while she incubates her new clutch. Both parents must be very weary by summers end. 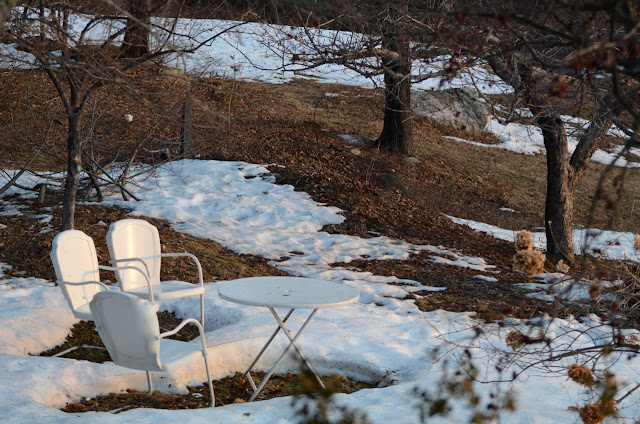 As this Bird Parade continues, the Mill River in the valley below, between our home and the hills across the way, is creating a chorus of spring snowmelt songs. The sound of water contained but spilling into streams, branches, rivers and rills covers a range of comforting mellow and melodic tones, to that of wild, thunderous and turbulently tossing tributaries. The rivers ‘rites of spring’ roar rises up from the valley floor, filling the air around this old farmhouse and studios, drowning out even Robin and Cardinal trills.
This morning I look out on a scene that is promising especially with the high temperatures that will arrive in the gardens today. It is a joy to see the earth again. Snowdrops are beginning to peek our here and there. I can imagine lovely lunches beneath the blooming Crabapples and Apple trees later on in spring. Nate was out yesterday pruning the Apple to the right of the table and chairs. 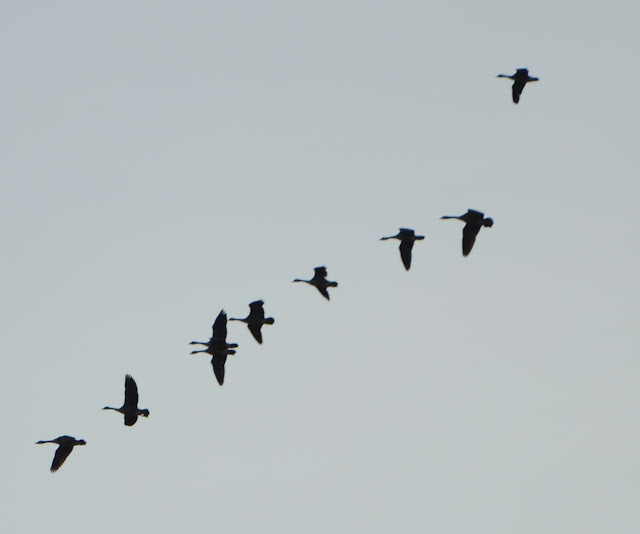 Movement and calls from several flocks of Canadian Geese passing overhead have livened up the morning too. 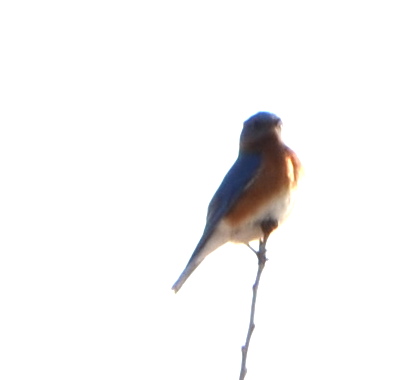 A male Bluebird sits atop the wounded native Black Cherry singing his heart out! It must be a comfort to the tree and certainly is to me. 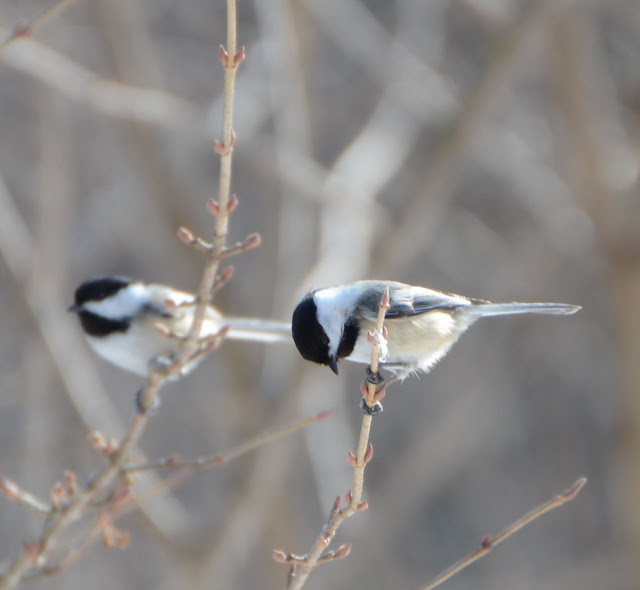 Chickadees are more actively chattering and darting about. I see a Pileated Woodpecker fly by, while I write these words. Spring is so very close now on the calendar but also in our gardens and fields. The joy I feel is darkened by the grief and horror going on in Japan and other parts of the world but especially right now, I grieve for Japan’s people. I grieve to hear my president proclaim that nuclear power will be a strong contributer to our energy in the future, even while seeing the utter horrific events unfolding in Japan. We are not victims however. We know that truth is not given and we must stand up and oppose such a dangerous, deadly, insane form of energy. If we do not, we only have ourselves to blame.
US Congress 1-202-224-3121, simply ask for your Senators or Representatives of the House and share your concerns. To my readers all over the world I ask that you too contact your leaders and let them know how you feel about this costly source of energy. To my Japanese friends . . . I am so deeply sorry for your struggles and suffering.