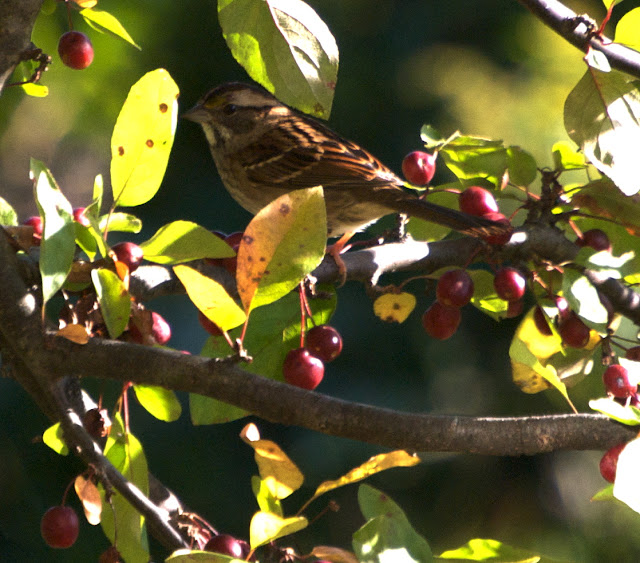 White-throated Sparrows (Zonotrichia albicollis) are one of the most striking of sparrows. 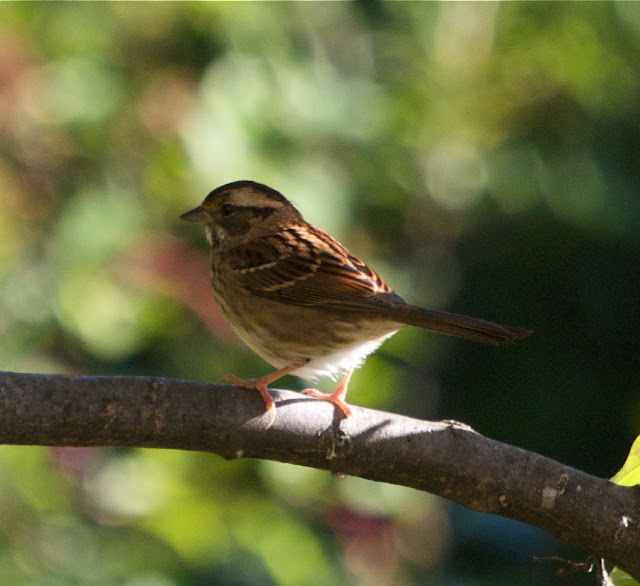 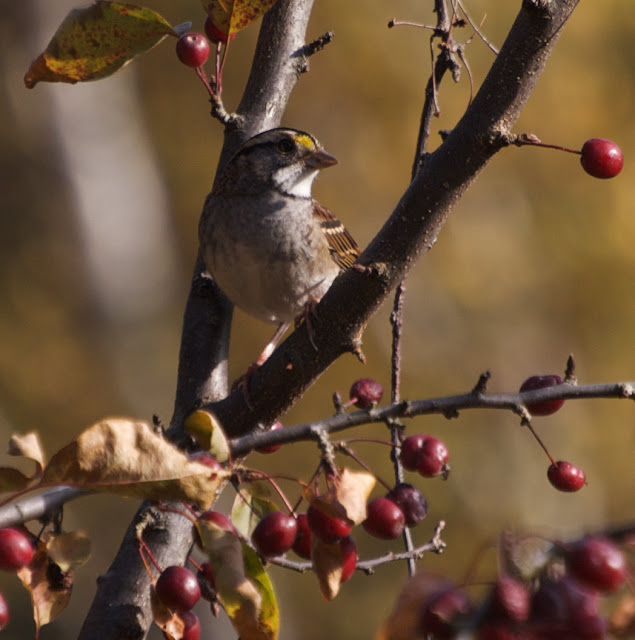 The White-throated sparrow has a boldly patterned head, with a wide white throat and yellow bands above the eyes. Black lines add a bit of drama outlining the crown, throat marks and through the eyes. They are often singing throughout the day in a series of whistles lasting about four seconds “Oh-sweet-canada-canada” Songs and calls can be heard at  All About Birds. 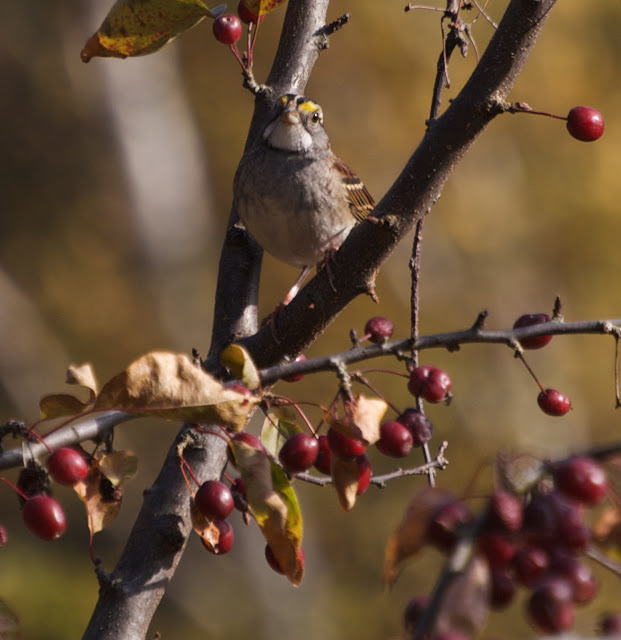 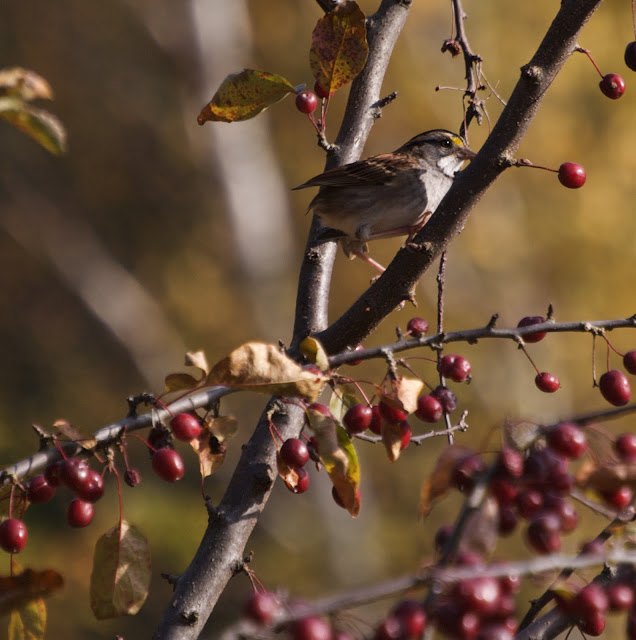 US residents might often see White-throated Sparrows at their feeders, especially in the winter months, for they over winter in much of the United States. They are at home on the forest floor and along the woodland edges foraging for insects and seeds. White-throated Sparrows will sometimes mate with the Dark-eyed Junco creating an unusual breed. They choose some of the northern tips of the US and much of Canada as their summer breeding range. 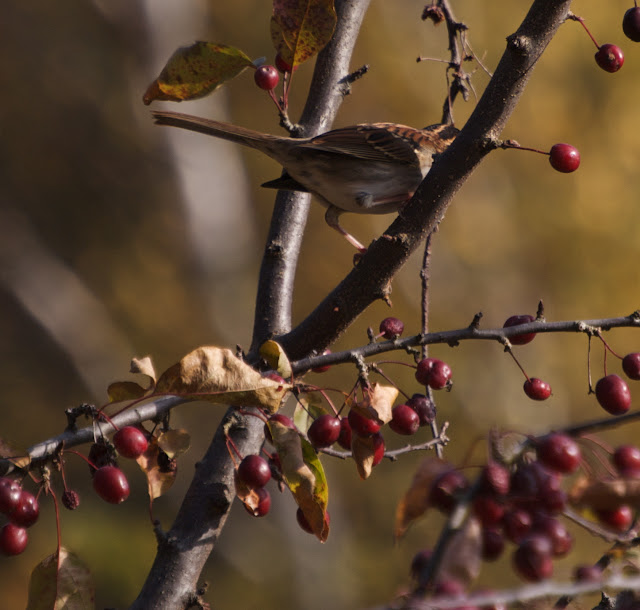 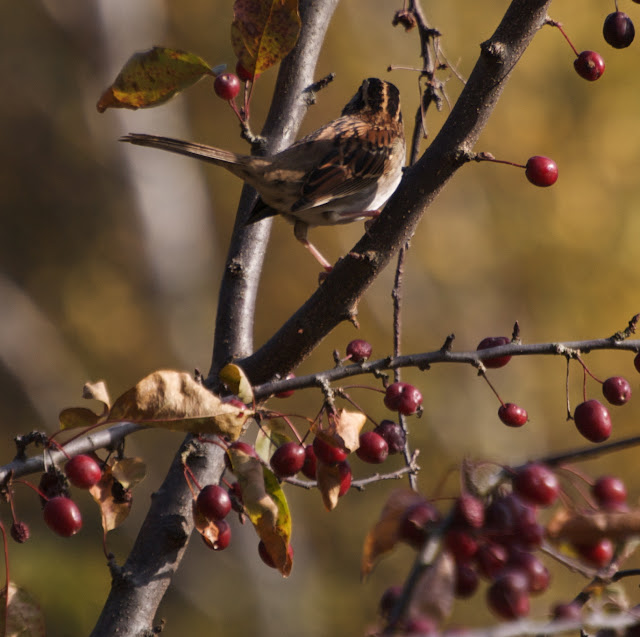 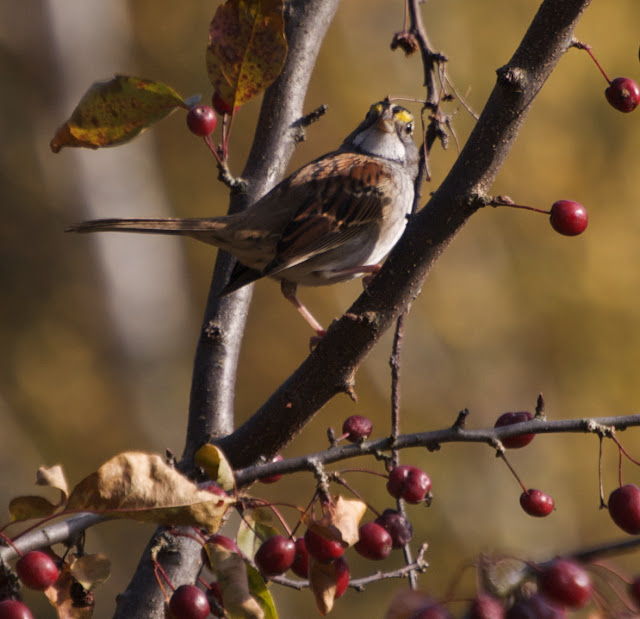 White-throated Sparrows typically build their nests right on the ground. They choose a secure place in a densely vegetated clearing, such as a lovely wildflower meadow. 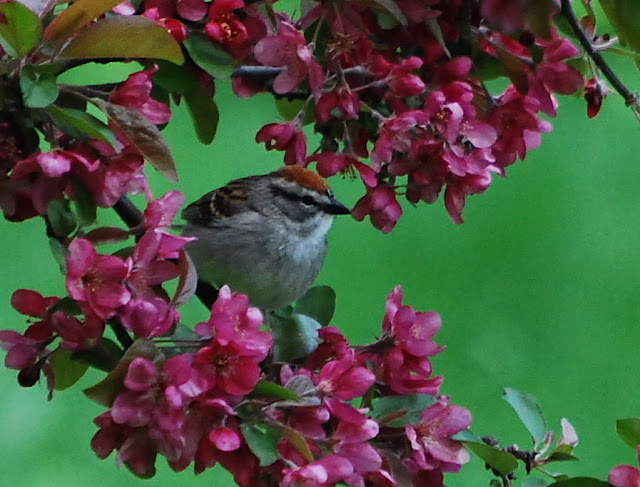 Another pretty sparrow is the Chipping Sparrow (Spizella passerina.) A russet crown, white eyebrow and prominent eye-line make it easy to identify. These smaller sparrows are often seen in trees and shrubs gleaning for insects favoring open woodlands and meadows for a diversity of wildflower seeds. They live and breed in parks and backyards over most all of the United States and Canada, where you will often see them at or below bird feeders. 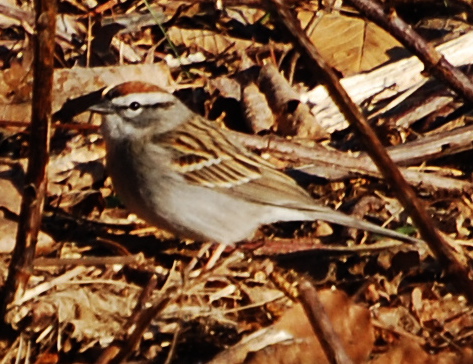 Chipping Sparrows are also constantly foraging on the ground. They are so well camouflaged that often it appears the early spring leafy ground is in movement itself until suddenly their shapes become obvious. 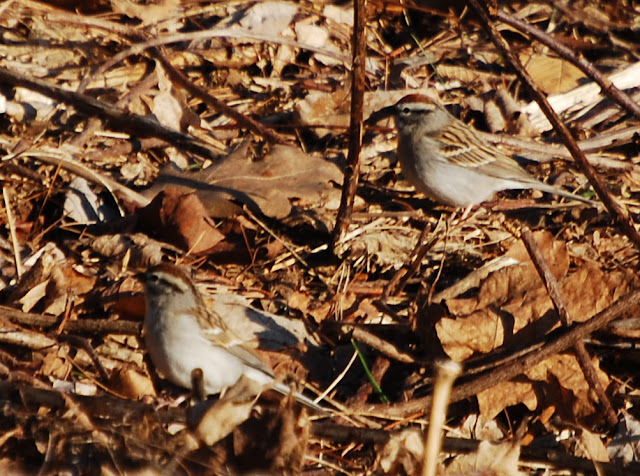 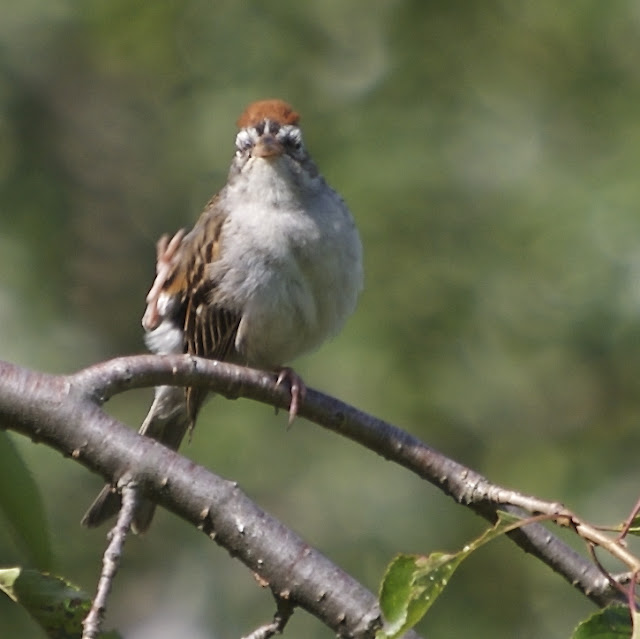 A Chipping Sparrow a bit out of character. This shot reminds me of Harpo Marx. 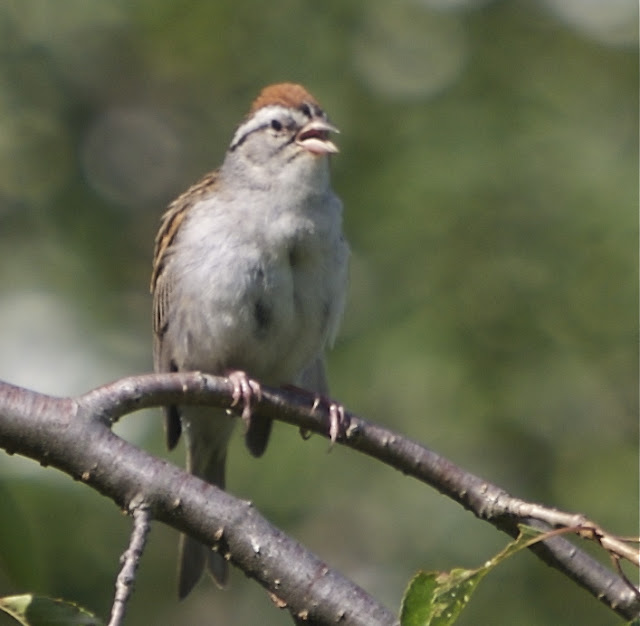 Chipping Sparrows choose the tops of trees and shrubs to sing out there numerous high trills. Their songs are not particularly melodious with a great many chips repeated in equal time and space over and again. 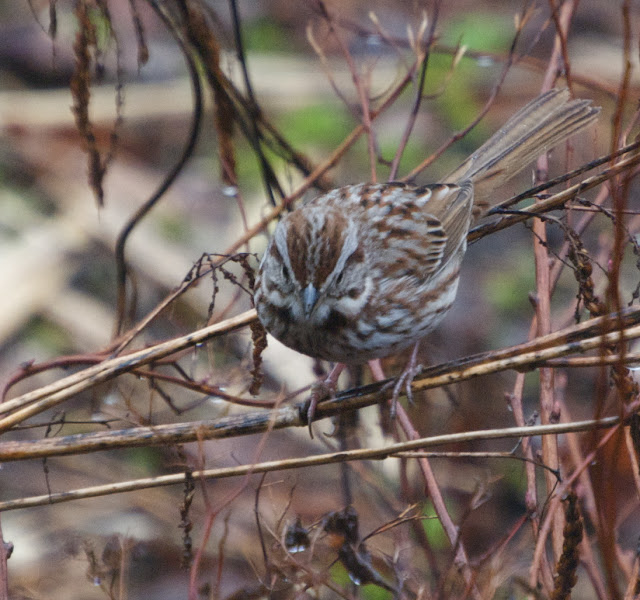 The Song Sparrow (Melospiza melodia) is widely seen throughout the United States and Canada and may have a variety of appearances depending on the area. Here at Flower Hill Farm we mostly see a very freely streaked reddish-brown and gray medium sized sparrow with pronounced white pattern beneath the beak. There is often a dark spot located on the breast which becomes very visible when the little bird reaches up to sing his heart out. 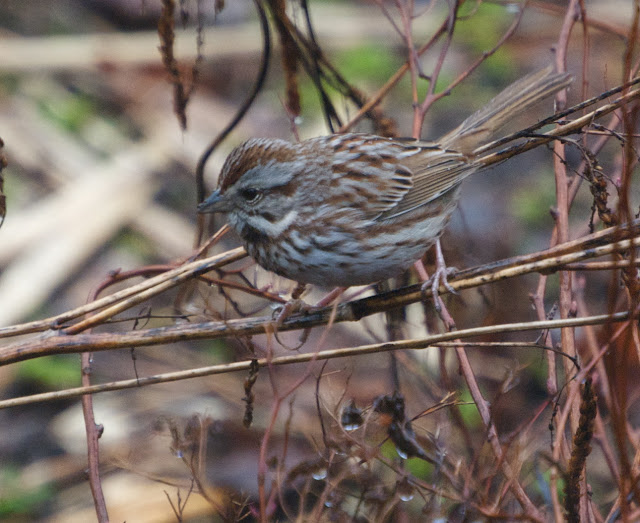 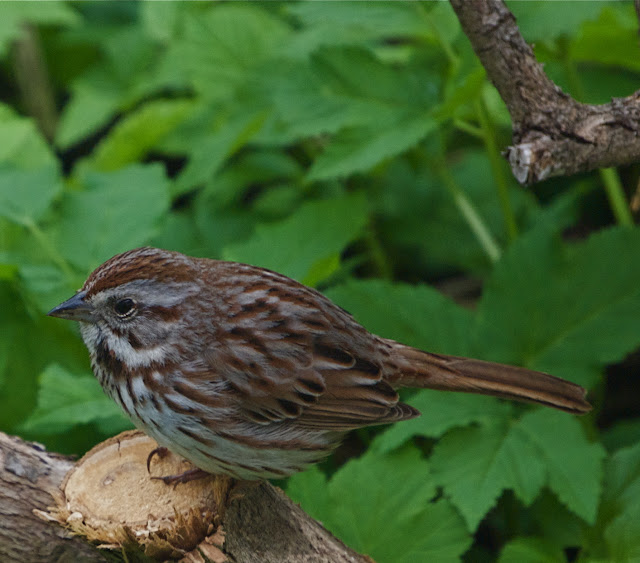 The songs and calls of the Song Sparrow vary as their plumage and patterns do, again depending on the area. Here their trills are grouped in lovely phrases and may be improvised. Sometimes it does sound like there is a sudden broken ending to their songs. 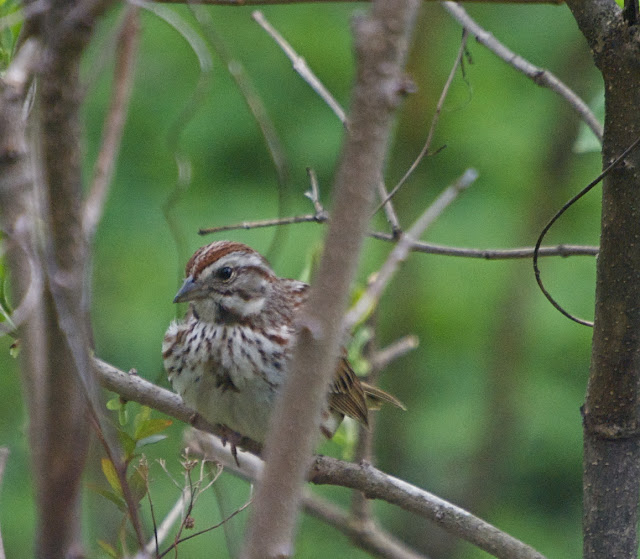 Song Sparrows are akin to the other sparrows feature in this post by their preference for open fields and forest edges. They mostly move about through fields or most any low vegetation and the lower branches of shrubs and trees. Often their nests are hidden within meadow grasses, in a flower border or sometimes built up higher in shrubs or trees. I have covered three kinds of sprightly and well behaved sparrows in this post. There are numerous more including the infamous House Sparrow (Passer domesticus), who luckily Does Not take up residence here at my farm. 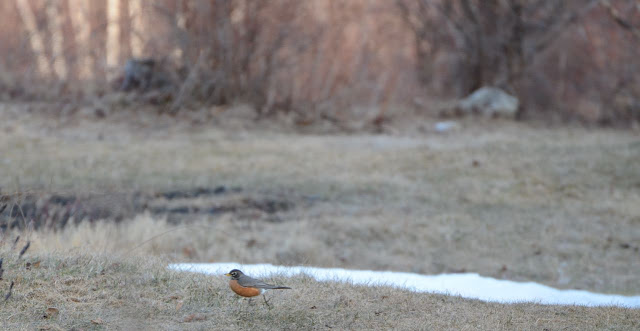 Back in real time . . . Spring seemed to be coming along and warmer temperatures were melting the snow so that Robins could enjoy stealthily surveying the open land. 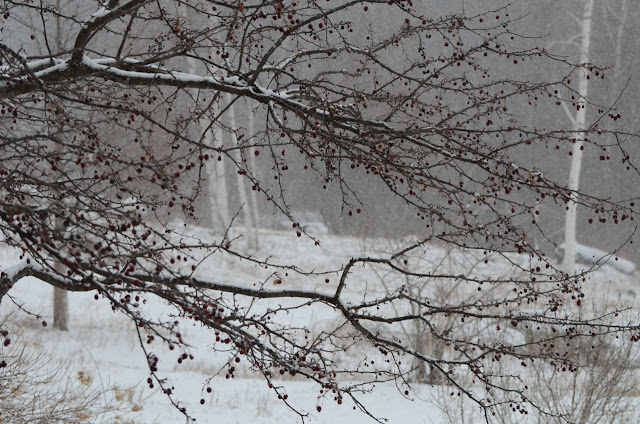 March is a tease, however, and its fickleness can be tiresome. Winter is still with us here in New England. I can dream of warmer days and wildflowers carpeting the open fields. For now I can join Gail over at Clay and Limestone to celebrate our native wildflowers. Like spring I am a bit late. I will also make this my early contribution to Blooming Friday. Join Katarina at Roses and Stuff to see other gardens around the world.