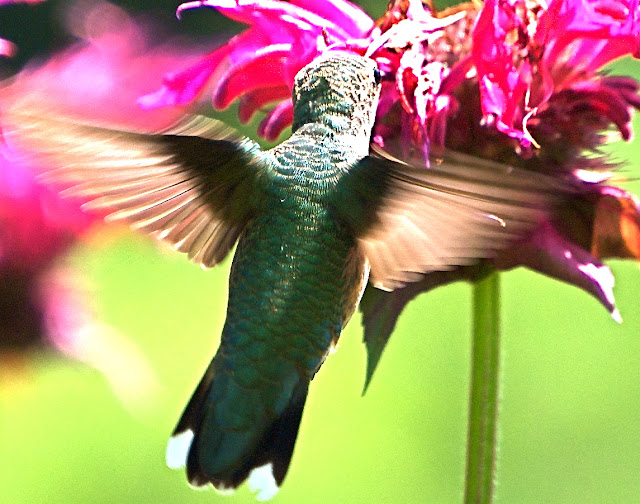 In honor of the beginning of April and because they have been migrating back from Central America to many North American gardens east of the Mississippi for awhile now, I am allowing Flower Hill Farm’s Ruby-throated Hummingbirds (Archilochus colubris) to get in line with the songbirds. There will be a few more songbirds featured in this parade later on. Ruby-throated Hummingbirds are precious, precise, flying jewels, weighing only as much as a penny or less. They are tiny wizards of flight able to travel up to 50-60 miles per hour, which helps them in accomplishing the perilous 500-mile marathon Gulf of Mexico crossing during migration and in escaping from various predators. Besides Central America many also now over winter along the Gulf Coast and the tip of Florida. This young female/male is feasting on the rich nectar of a native Wild Bergamot or Bee Balm and will visit countless flowers each day in order to sustain her/his high metabolism.  The tail with rounded edges and white tips is a detail to look for in identifying the gender of these hummingbirds. 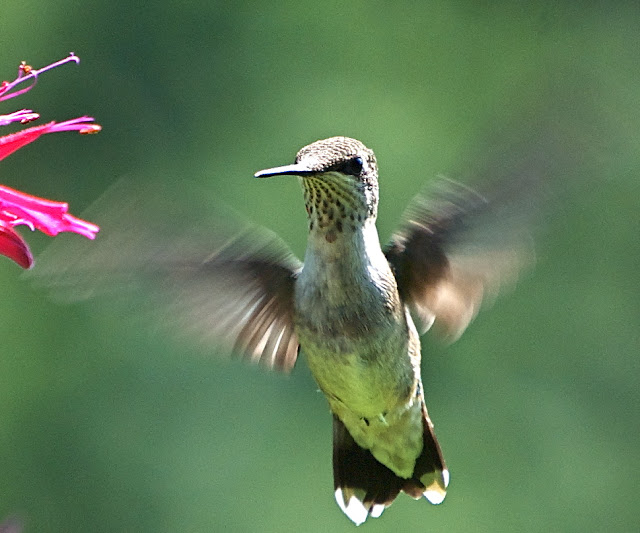 In the past I had been certain this bird was a young male Ruby-throated Hummingbird, due to the throat patterns I thought would become red by the next season. Now I not sure, for the tail is misleading. Males  have a decidedly forked tail with no white tips. It is a bit confusing, however, because juveniles look like the females. Does this mean the tail of the male will molt later on to the forked shape? I have not been able to find the answer to this question. The female Hummingbird is also a bit larger and has a longer beak. Notice how this young female/male appears to be without legs and feet. In fact ‘All About Birds’ states that the order Hummingbirds are place in . . . Apodiformes . . . means “without feet.” As you scroll down through these images of hummers you might agree that they seem not to have much in the way of trotters. 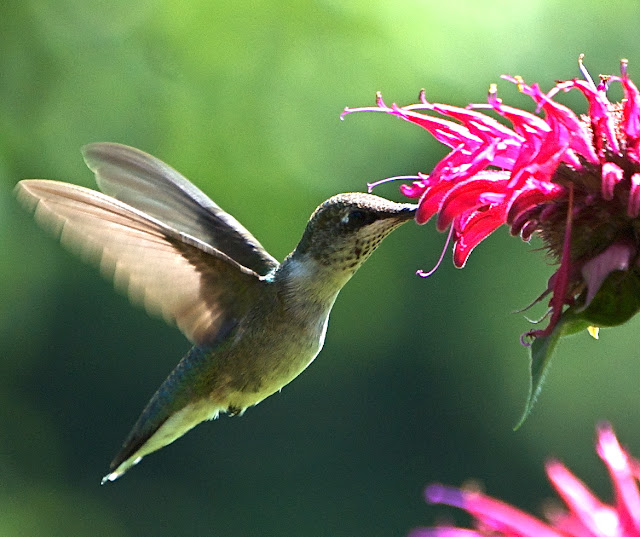 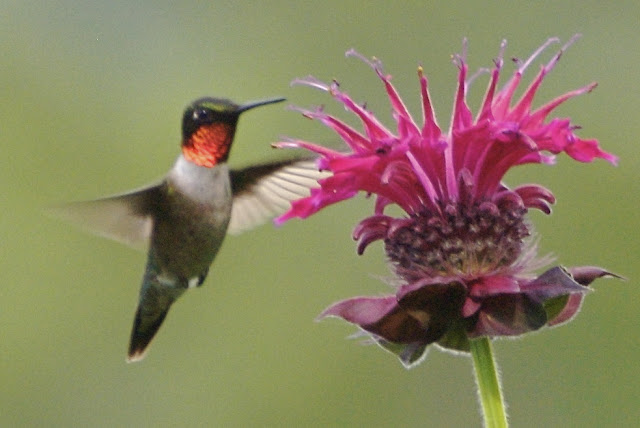 A male Ruby-throated Hummingbird about to dive into Bergamot. 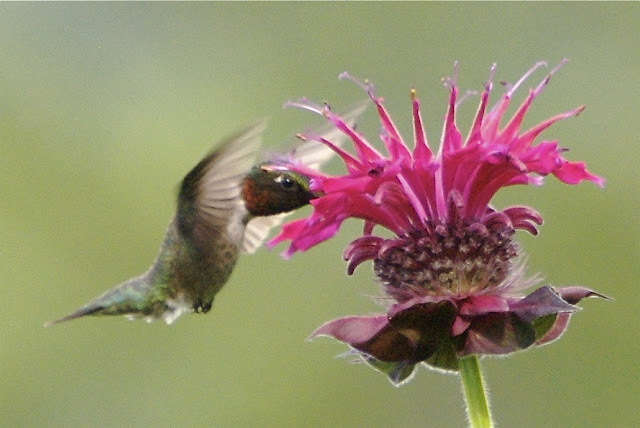 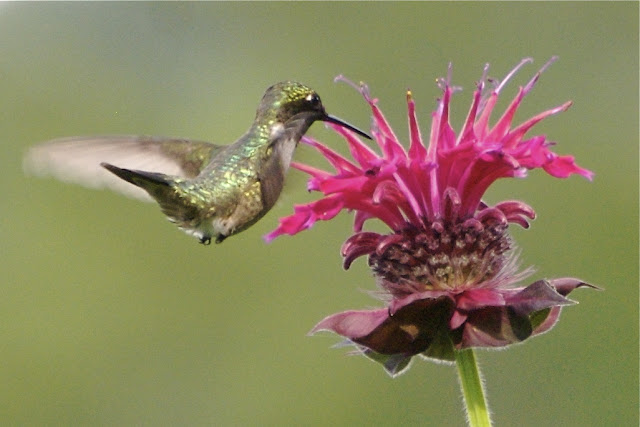 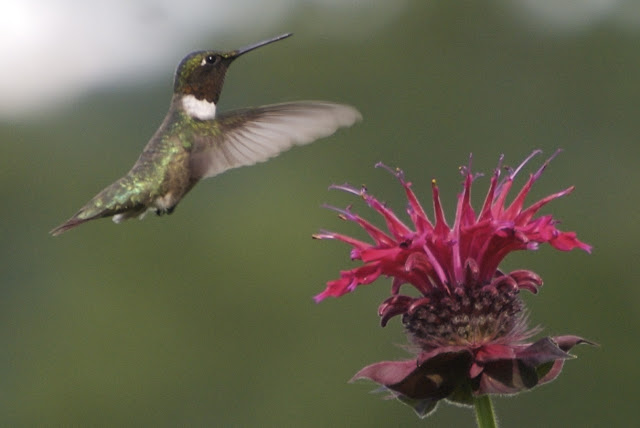 Great maneuvers of flight, Hummingbirds can come to a complete stop in an instant and hover, turn or fly in any direction. Males draw out a large U when courting a female, diving high and low. I also see them zigzag horizontally back and forth, left to right and though I never see her, a female must be perched nearby. During courtship the male’s wings beat much more rapidly than normal. The humming of their wings is the reason for their name. You can listen to the various calls they have here. 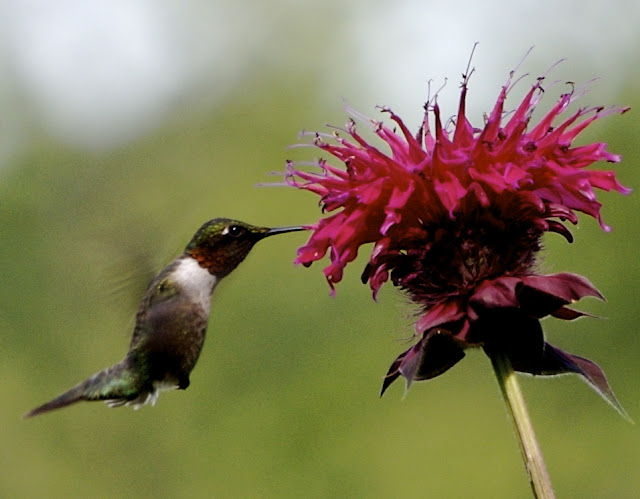 While the Ruby-throated Hummingbirds hover to drink nectar, their wings are rapidly moving up and down over fifty times a second. They burn a lot of energy this way and must consume great amounts of nectar exceeding their weight by a few times at least each day. At night they are able to conserve energy by shutting down or going into a state of torpor . . . their heart slowing down, heat escaping while they sit still and seemingly lifeless. 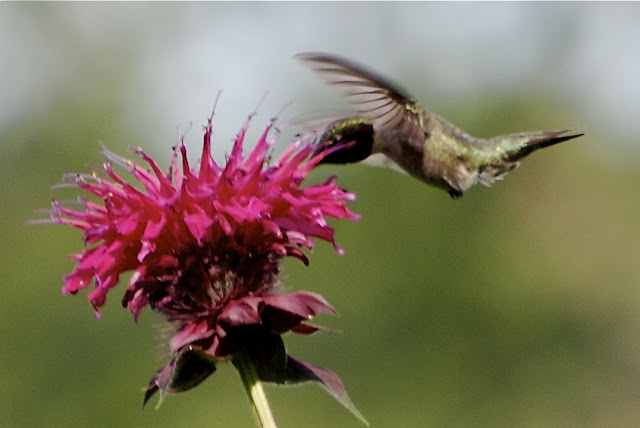 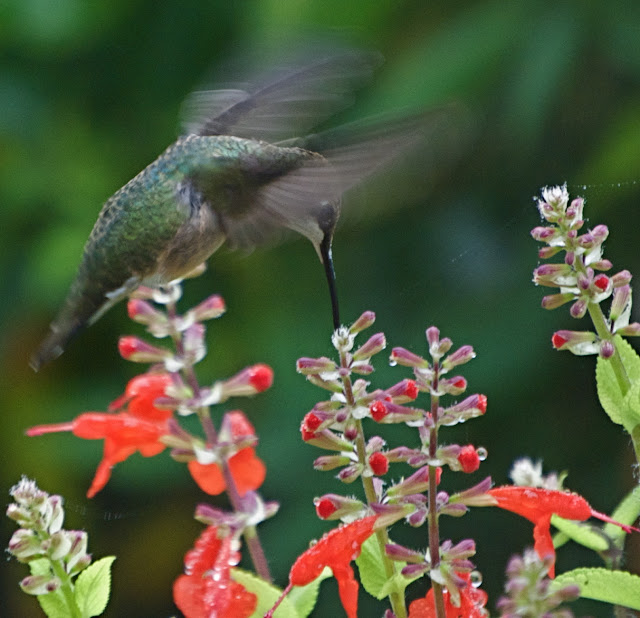 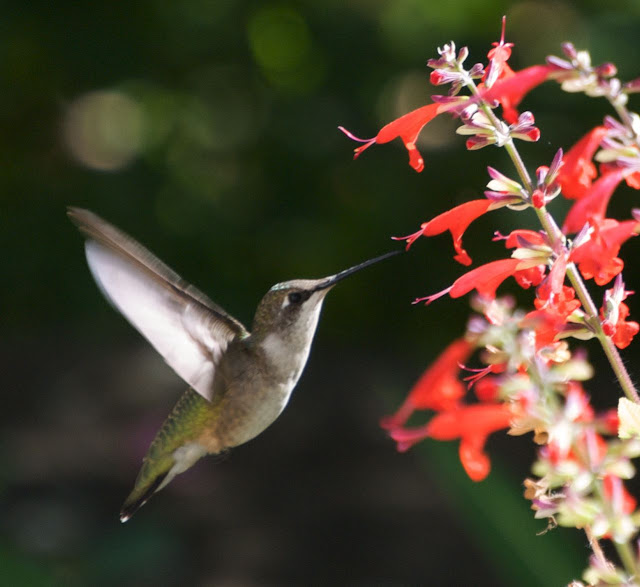 Red Salvias in the terrace garden are a particular favorite of the Ruby-throated Hummingbirds here at Flower Hill Farm. 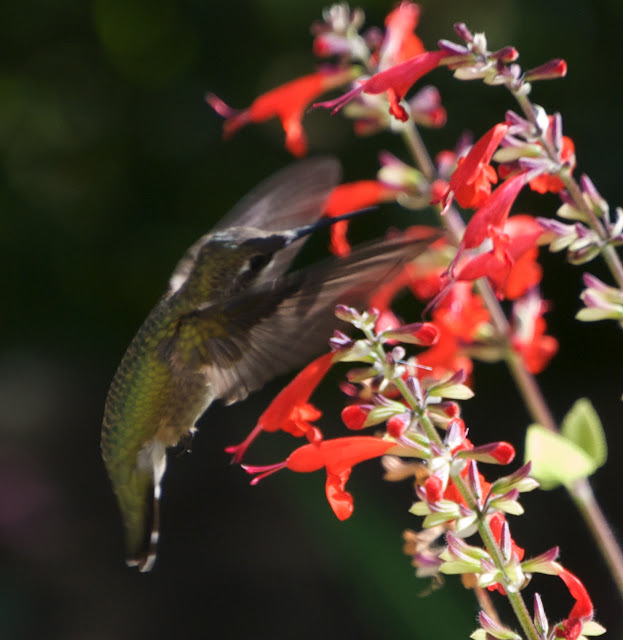 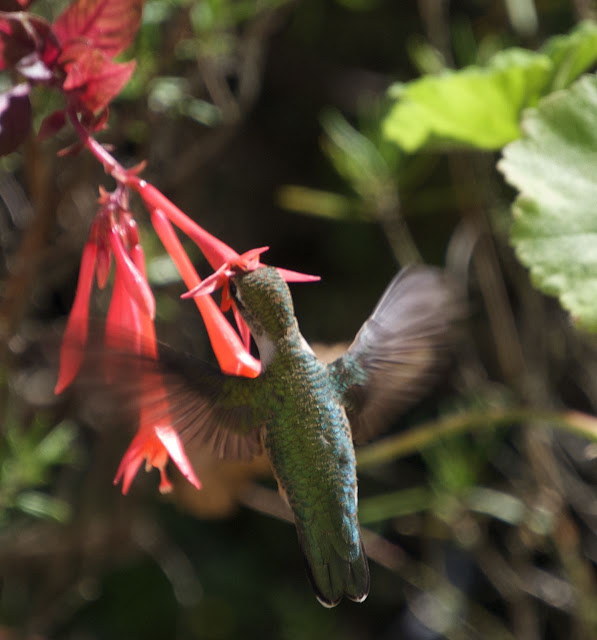 Getting lost within blossom bonnets. 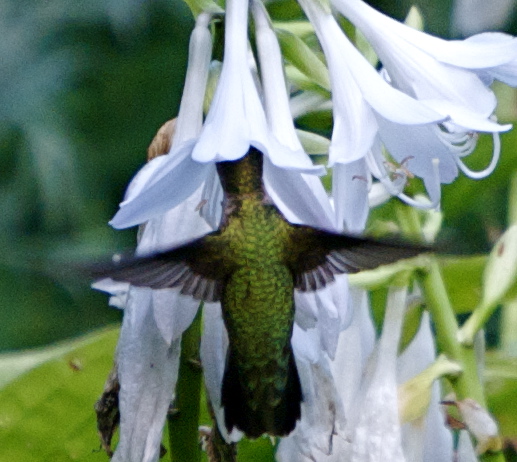 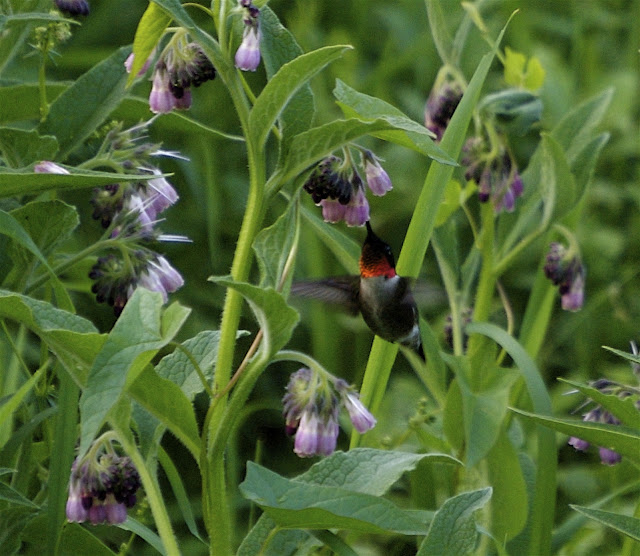 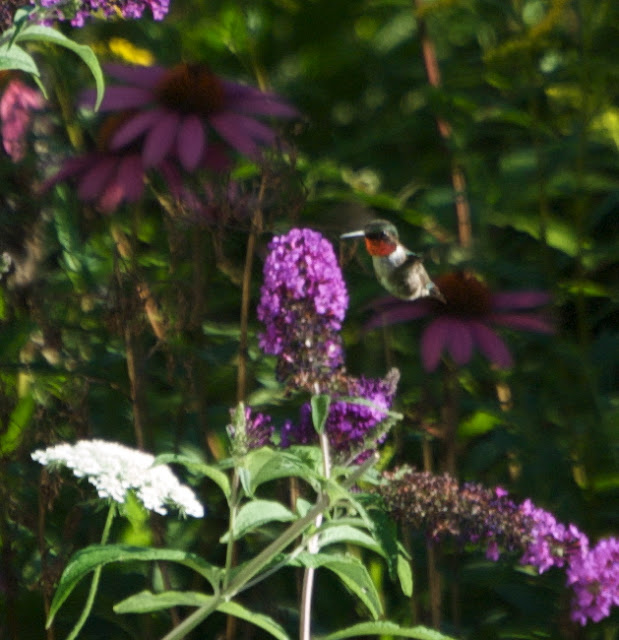 Ruby-throated Hummingbirds are solitary creatures who enjoy each others company only when courting and mating. Daring males will strenuously defend their territory from other birds. I have even seen them chasing Red-tailed Hawks! Females build their teeny nests in trees or shrubs in the garden or along the woodland edge. She builds her nest alone and might add lichen along the outer side. Some years she may reuse a previous years nest. She can raise up to three broods each summer. She alone feeds them a mostly insect diet.
Here a male enjoys Buddleia Black Knight. Hummingbirds prefer bold colored reds and orange blooms but truly will visit a diversity of flowers in all colors and harvest their nectar. I earlier saw this male go to both the Echinacea and Queen Anne’s Lace. There are no fast-food stations here at Flower Hill Farm. The only feeders we have are the natural blooms that grow throughout the landscape. 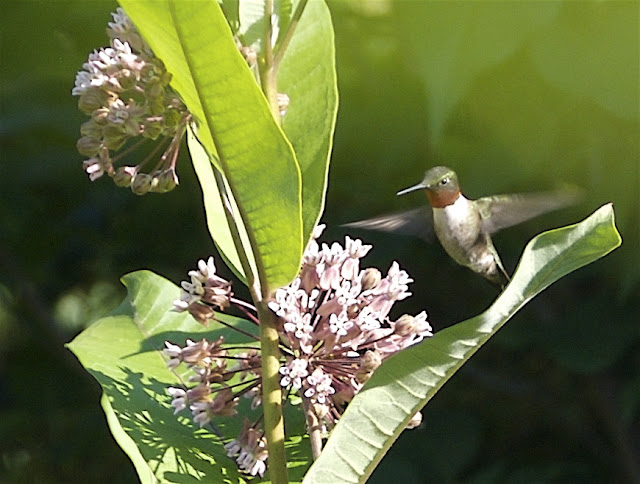 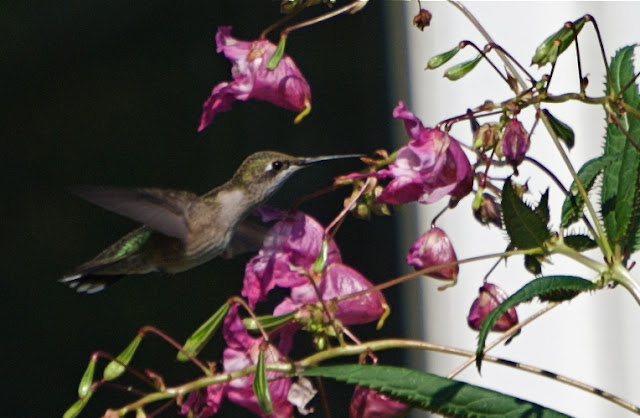 Impatiens glandulifera Royal is inviting to this young hummer. 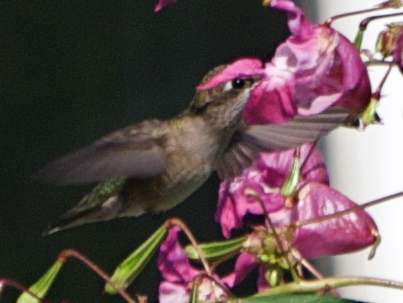 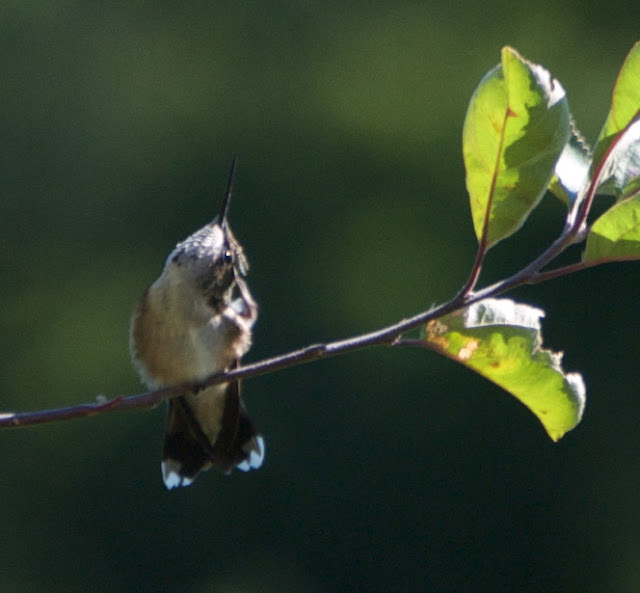 It takes a great amount of energy to move about the gardens visiting the many flower feeders. The little birds get plum tuckered out and need a bit of rest now and then. Though they may not be able to jump or walk about as many other birds do, Ruby-throated Hummingbirds sure can reach up and scratch! I imagine that is quite a relief for this adorable juvenile female. 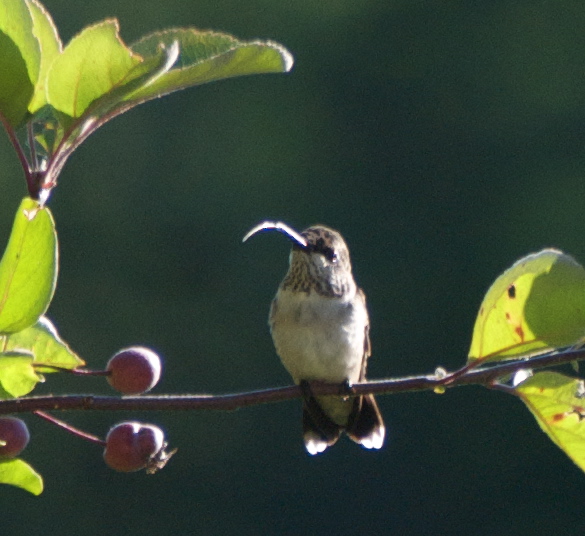 Perhaps the act of sticking out her tongue was not intended for me, but is more like our flossing as she may be scraping her beak clean from sweet sticky sugars. Perhaps a tongue stretch feels good too. 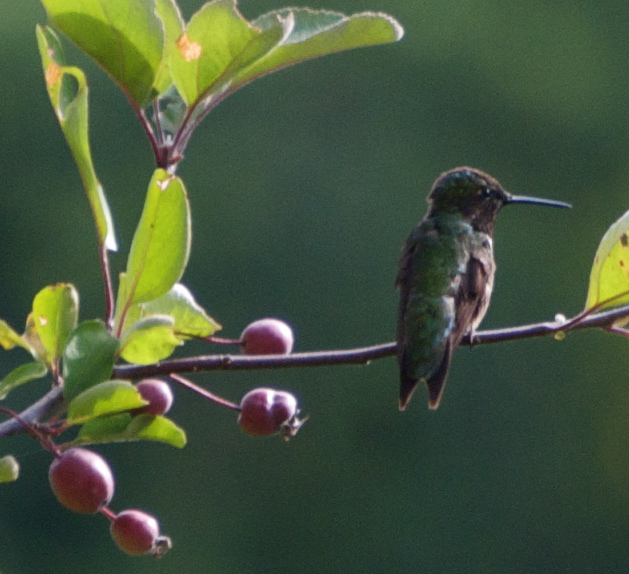 This fellow exhibits a perfect example of a male’s tail. . . neatly forked and as you can see . . .  no white tips. This portrait was taken in late summer last year about the time of migration. Note the molting, which makes the Ruby-throated Hummingbird look slightly disheveled. He was just passing through and I was glad for his visit, for I had not seen a hummer molting before. There is no light to enhance his beautiful fiery throat. Good lighting is a must to show off his ruby colored collar. 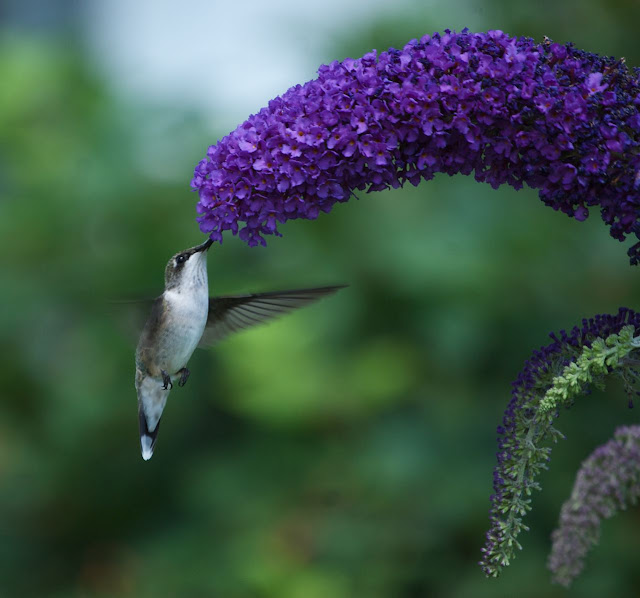 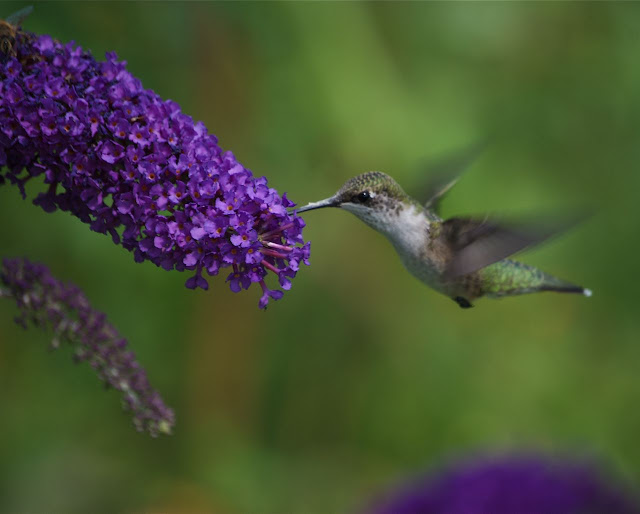 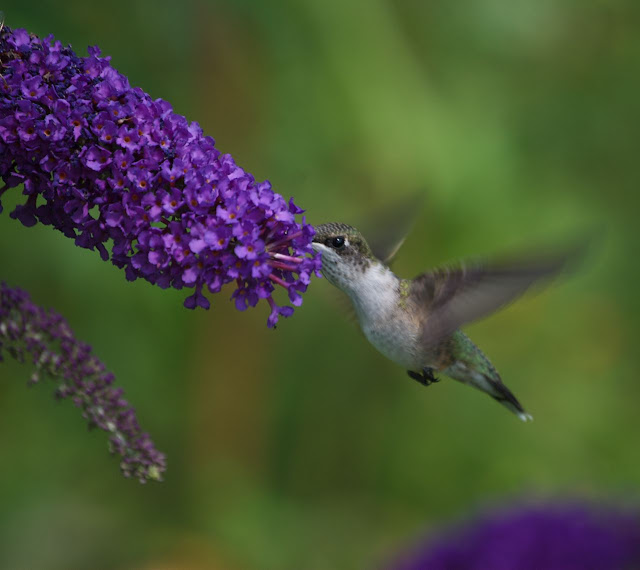 The young Ruby-throated Hummingbirds are not very people shy. I have been standing in the garden with a bouquet of flowers, while a immature hummer would go from one flower to another, until she partook of the sweets of each blossom I was holding. The mother hummer came towards us and chased her away and seem to be scolding the young bird. I often have bee visitors this way, but it is a special treat to have a hummingbird bless my bouquet. I truthfully do not enjoy picking flowers anymore, as I hate to take their food away from the garden. One year I saw a Hummingbird perched on a nearby branch, while I was gathering a few blossoms from the cutting garden. I picked a bright red Journey’s End lily and decided to hold it up facing the hummer. Much to my delight the tiny bird flew right over to me and preceded to drink from each bloom until it finally came directly to my nose. It quickly determined I was not delectable and went back to the other blooms before flying off. I was glad it did not think to attack the mirror of itself in my eyes! Another close encounter with hummers was when I heard the familiar sound of their rapidly humming wings and found that a bird was trapped up in the rafters of an enclosed (the door was open) breezeway. I happened to have a Casablanca lily inside, so ran to fetch it. Once back I held it up towards the roof and sure enough the Hummingbird came right down to the flowers and took a sip, then sat on one of the side stems to rest. I slowly guided the flower over to the door and the little one flew out to his freedom.
I so look forward to the return of my resident Ruby-throated Hummingbirds. I will not see them here again until May, when the males will arrive first to claim their territory. For today they light up my ‘Bird Parade’. 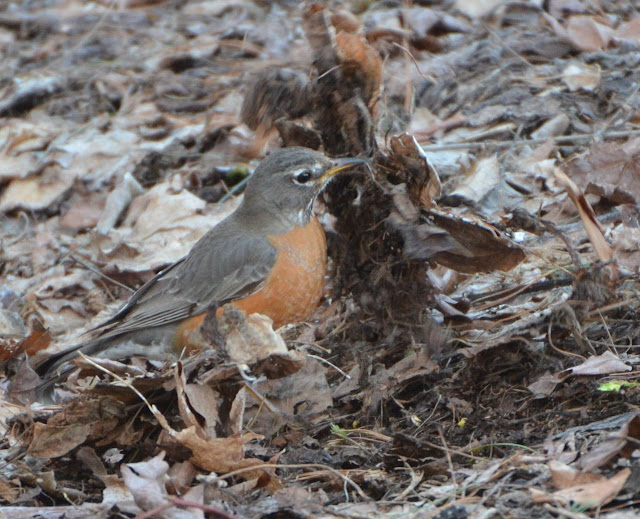 Meanwhile on the ground this second day of April, Robins are busy lifting leaves. Actually this was two days ago, before the nor’easter we had yesterday. The snow is melting already thank goodness. 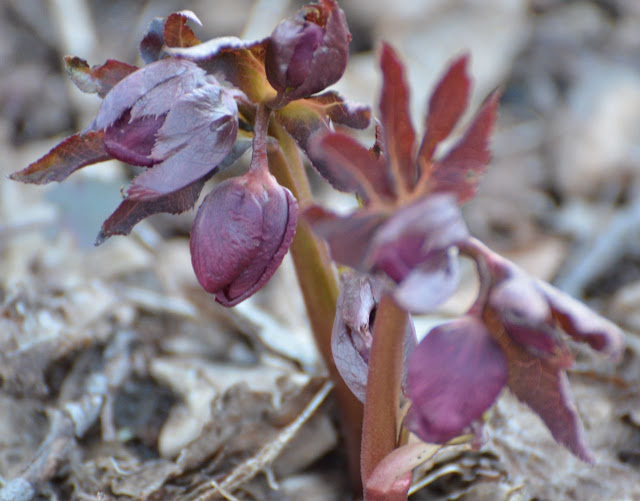 Hellebores are pushing up their buds. The ones above are in a south facing area, whereas the ones below are later to emerge due to their less sunny/warm position. 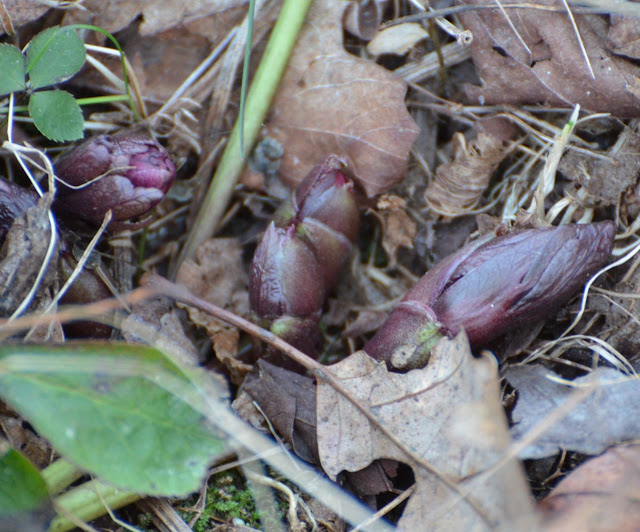 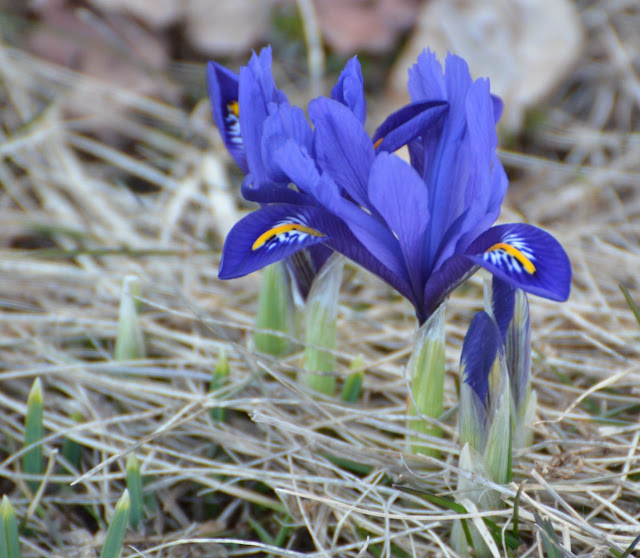 Iris reticulata are beginning to run down a southeastern slope. 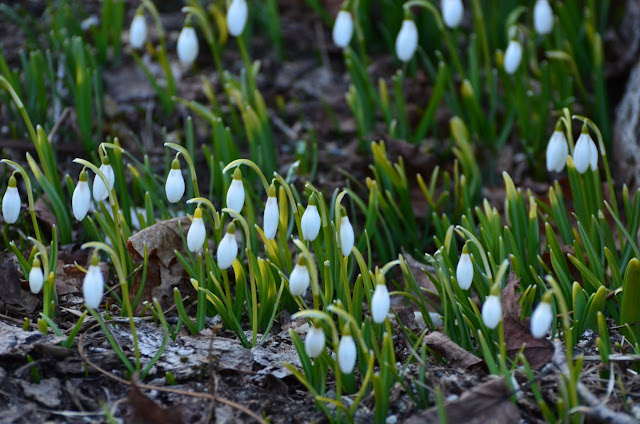 Snowdrops are braving the cool days and chilling nights. I am hearing Woodcocks calling out from the lower field and forest edge but have not seen their mating flight. They were late to return, so I hope I may yet get a glimpse of that magical spring ritual. Katarina over in Sweden at Roses and Stuff wishes to see what is on the ground for this Blooming Friday. I am so happy to finally have some blooms to share.