You are here: Home / Butterflies / Flower Hill Farm Butterflies of 2012 ~ Red-spotted Admiral
Later on in this merry month of April, here in Western Massachusetts, Red-spotted Admirals Limenitis arthemis, who survive the cold winter and foraging birds, will awaken from their overwintering third larva stage. Flower Hill Farm has many of the preferred larva host plants or trees.
The sleeping caterpillars, mimicking bird droppings, may be hiding out in some of our Black Cherry, Yellow Birch, poplars, hawthorns and shadbushes. When they awaken, the caterpillars will munch on leaves for a few weeks and become chrysalis before beginning their flights as butterflies in May or early  June. In their time they will lay a single dome-shaped green egg on the tips of leaves of the host plant.
It can be confusing to identify these butterflies if you did not know that two former species, the Red-spotted Purple and the White Admiral have now been lumped together as Red-spotted Admirals. 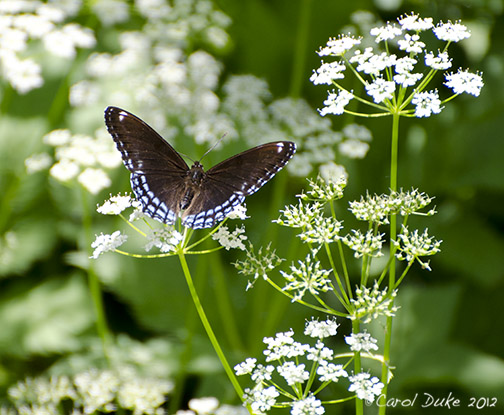 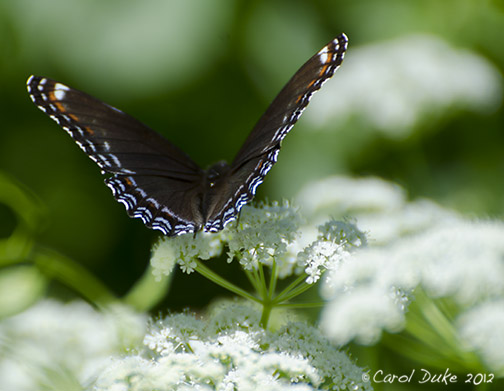 This past June I sighted a butterfly feeding on, of all plants, bishop’s weed. 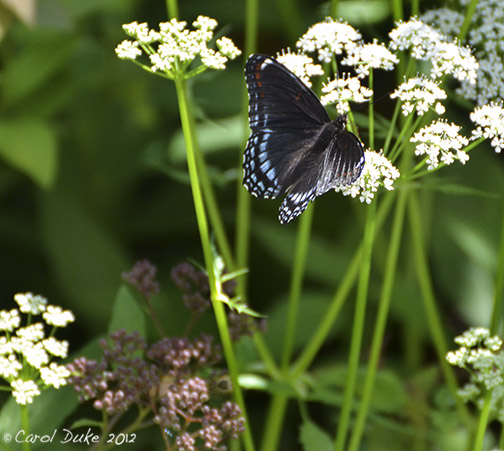 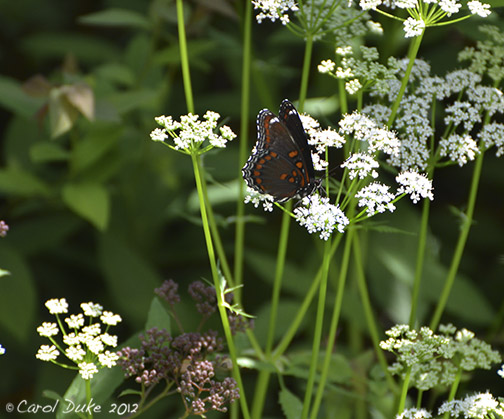 This photograph with the Red-spotted Admiral caught in the shade shows the truer red color of the spots. 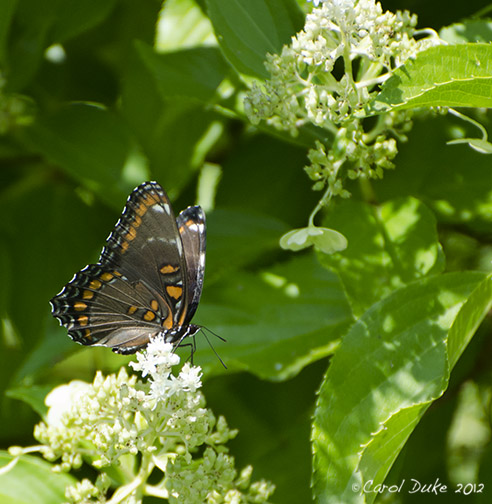 I keep reading that various butterflies, the Red-spotted Admiral included, prefer tree sap or excrement to flowers, but I tend to always see them on flowers. They seem to enjoy a diversity of nectar and I must say I prefer a portrait with these backdrops, but it is a great survival technique to have a varied palate especially if there are no flowers in bloom. The Red-spotted purple is designed to mimic the Pipevine Swallowtail, which I have not sighted here as yet, but as with its cousin the Viceroy I do not see that mimicry is foolproof. 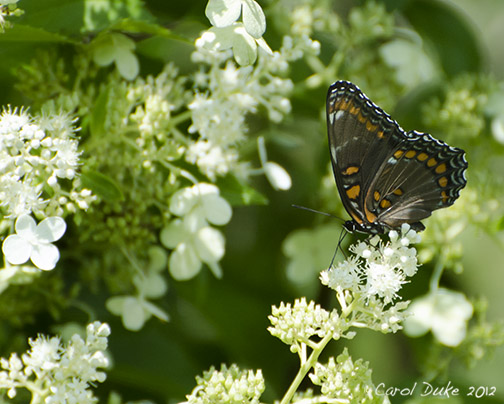 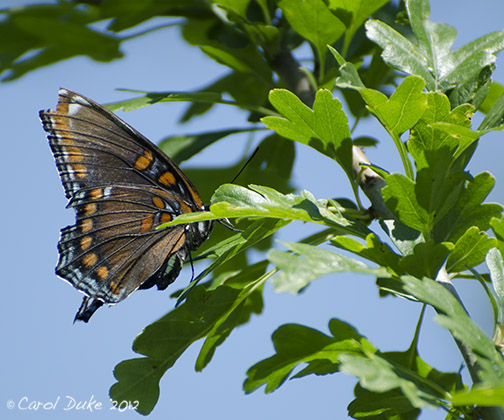 This Hawthorne may be a host for some of those sleeping caterpillars. I did not see the Red-spotted Admiral actually fastening eggs but just maybe (if it is a she) she did. 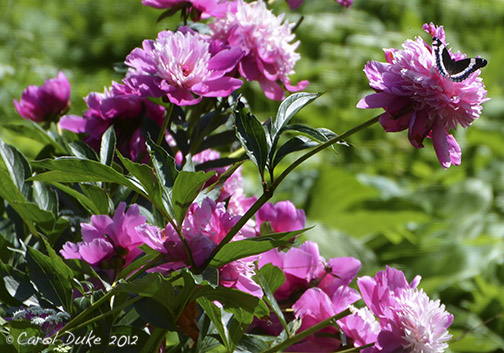 The only White Admiral form I was able to capture last year was exploring a peony. I am including others from previous years to further illustrate the different forms. 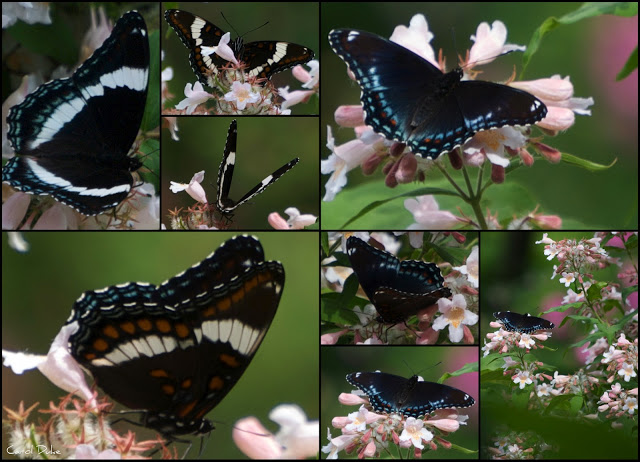 Both forms of Red-spotted Admirals feeding on beauty bush in May of 2009. 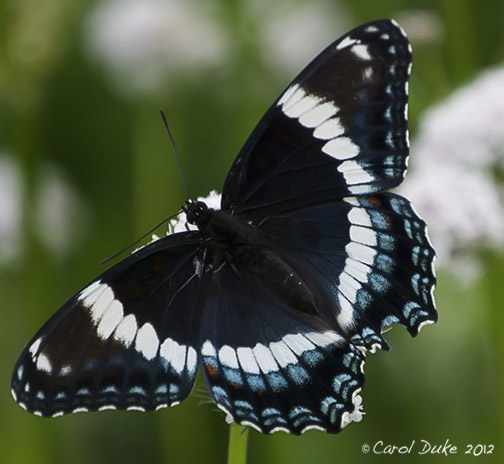 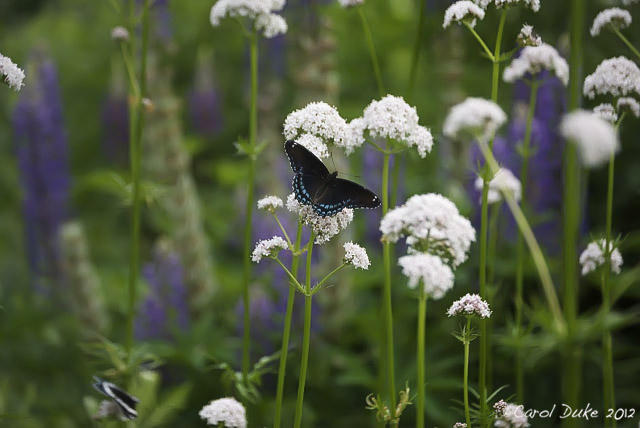 A Red-spotted Purple form is sharing the flowers. In the bottom left corner you can see the former ‘White Admiral’ form of the Red-spotted Admiral from 2010. Both forms are enjoying delicious garden heliotrope. I have had steady sightings throughout the years and do find it amazing that these butterflies survive in their overwintering stages both from the cold and the birds . . . they must be very clever in their ‘tent’ creations that hide and shelter them from the many winter storms. 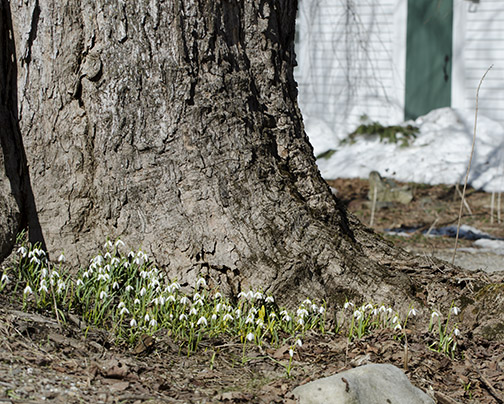 As I write it is snowing outside . . . only passing showers luckily. Snowdrops are taking a stand against the cold and melting snow in their dainty stately way. I guess I can bear up too. 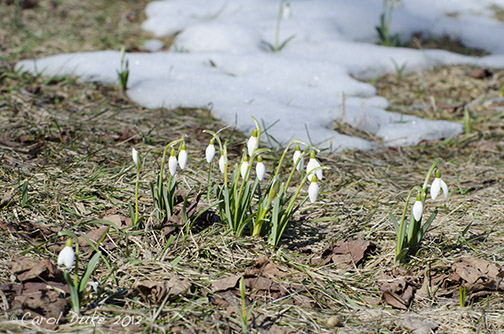 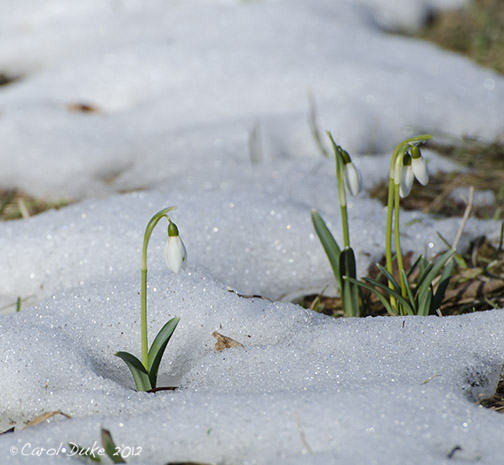 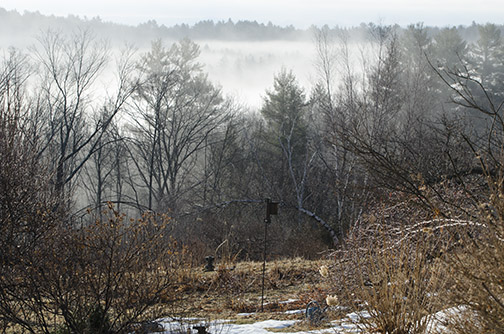 It is heartening to see the snow disappearing. Our Phoebe returned two days ago and I saw my first butterfly of 2013. A Mourning Cloak enjoys the warmer days but I am not sure it can survive temperatures dropping to nearly 19 degrees . . . as in Fahrenheit.
More butterfly sightings to share and I have not begun the birds of 2012. Where did the winter go?
Happy April.