Flower Hill Farm Butterflies of 2012 continues on this Earth Day, celebrating the butterflies that were sighted on our farm mostly over the past year. This installment features the teeny and erratic Skippers of the Hesperiidae family.

Skippers may not be the showiest of butterflies and this makes them all the more challenging to identify. Here is a terrific video site which reveals live in the field skippers that is great for learning how to identify these little butterflies.

I have tried with the help of others to identify the Skippers below but there may still be some mistakes. With many Skippers a guess is about as good as it gets, especially when the photographs do not show enough detail. 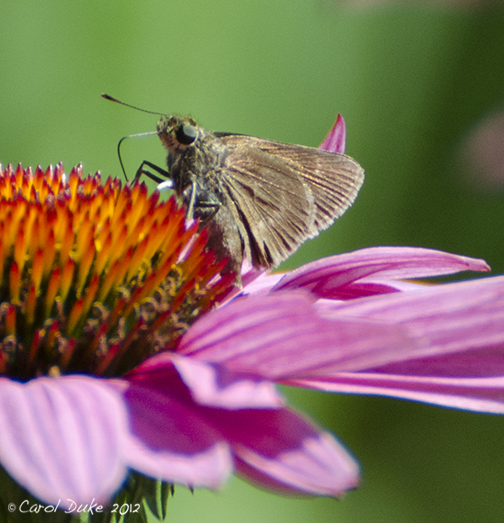 A Crossline Skipper Polites origenes, contently sipping from an Echinacea in the middle meadow garden last July. These tiny skippers fly for only one flight period beginning the end of June through early August. Females lay eggs on a variety of grasses found mostly in dry fields or other open habitats where the caterpillars will weave together two blades of grass for privacy while feeding. 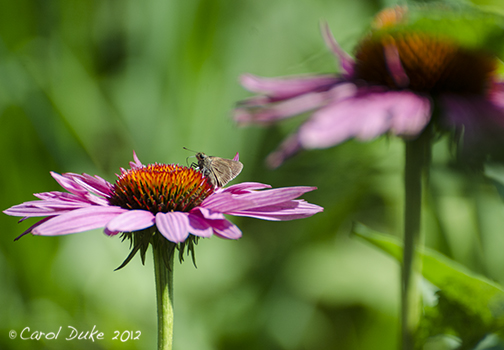 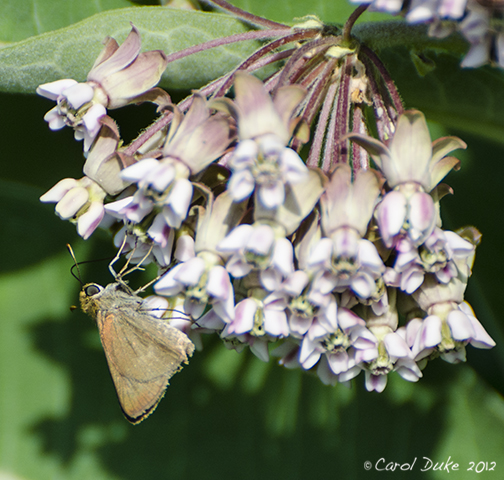 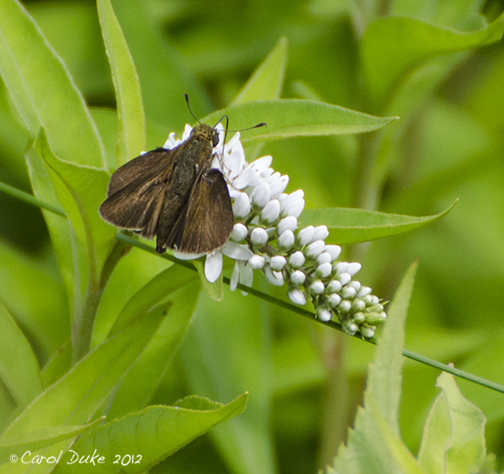 A Dun Skipper Euphyes vestris, feeding last July in the middle meadow garden. These skippers are fairly common and might be seen in numbers of one hundred or more from late June through to the middle of September, though more often seen from the beginning of July till the end of August. The larva feed mostly on sedges. The delicate eggs are fastened one at a time to the leaves of the host plant where the young caterpillar will roll the leaves to feed. Dun Skippers overwinter as a third instar larva. 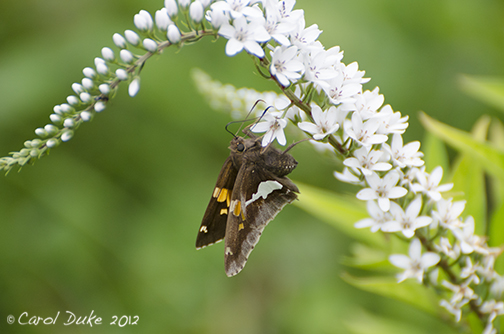 A Silver-spotted Skipper Epargyreus clarus, beneath the graceful curve of a not so gracefully behaved gooseneck loosestrife in our middle meadow garden last July. This skipper is commonly sighted in large numbers throughout the state of Massachusetts and has the coolest caterpillar form of a bright yellow with a red collar below its dark brownish head. Very striking and I wonder what the birds make of it. The caterpillars will fold over a leaf corner to feed and when older they fasten together two leaves with their silk threads creating a nest to hide within during pupation. 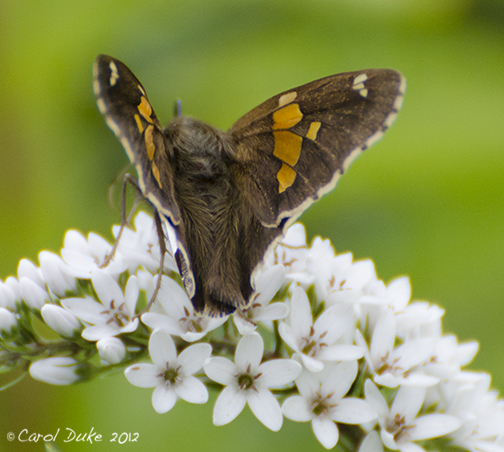 The Silver-spotted Skipper is larger than most other skippers and flies about gardens and meadows from May through October but more often the beginning of June to the middle of August. In Massachusetts they may only have one flight period. The females seek out various leaves of legumes such as Honey or Black Locust, False Indigo and some clovers to fasten a single egg to. I will carefully search the locust saplings I cut from the fields this year to see if I can find some Silver-spotted Skipper eggs of this butterfly. They overwinter as a pupa. 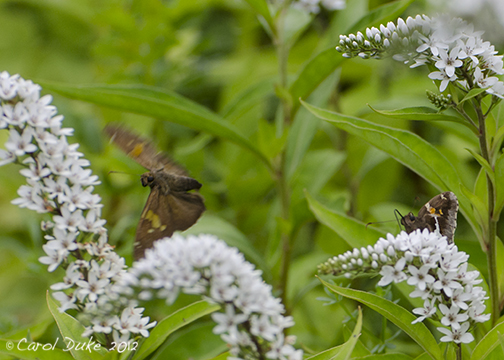 I wish this was a native bloom! Yet another thug growing here at Flower Hill Farm. Lysimachia clethroides is native to China and Japan. We have it growing here between two mowed paths. I find it easy to keep in check but know that it can become very invasive. 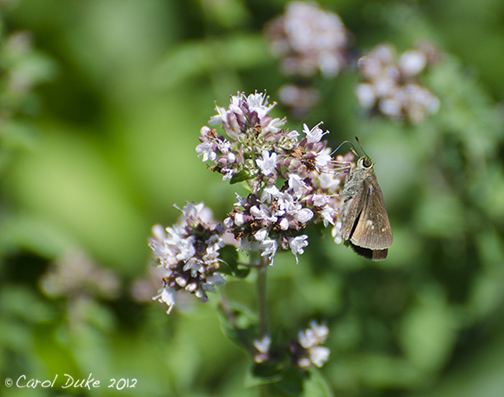 A mystery Skipper in the south field last July. 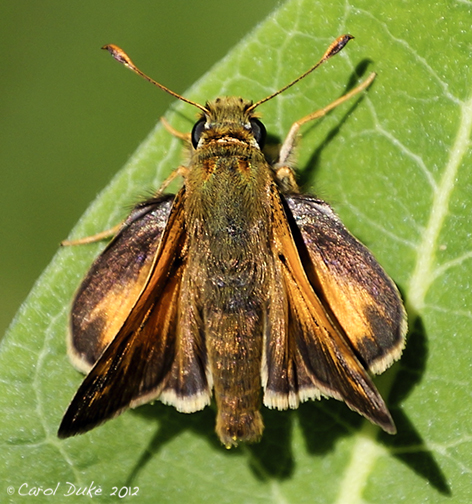 In an earlier post of Butterflies of 2011 I had not been able to identify the Skipper above. Hopefully I have it right this time. I would not be able to name any of these little Skippers without the help of the great website and generous folks in the Massachusetts Butterfly Club. Many thanks go out to Joe for letting me know Indian Skipper Hesperia sassacus, is the right name for this butterfly who was sunning on a milkweed leaf near a swarm of honey bees back in late May of 2009.

These butterflies fly about only from the end of May through the end of June when females deposit varying shades of green to white eggs on various grasses.

The fabulous Butterflies of Massachusetts site lists a number of grasses used by the larva. I will have to be sure to cultivate these in an undisturbed area near the forest edge here in future for these butterflies may be on the decline. I do not understand why it does not continue to fly and mate throughout the summer months. The Indian Skipper overwinters here in either larva or pupa forms.

I am so deeply thankful to our mother Earth for all of the diverse creatures that enrich my life daily. Butterflies are especially magical to me and through their amazing metamorphosis inspire a deeper appreciation for all life and the countless changes that abound within it.

Monarchs are up next on Flower Hill Farm Butterflies of 2012!