You are here: Home / Butterflies / Flower Hill Farm Butterflies of 2012 ~ Whites and Sulphurs
The Cabbage White Pieris rapae, Orange Sulphur Colias eurytheme and Clouded Sulphur Colias philodice, are all inhabitants of Flower Hill Farm and are featured in this installment of Flower Hill Farm Butterflies of 2012.
The Cabbage Whites I have photographed are males. A female has two black dots on each wing.
The originally Eurasian and abundant Cabbage White is hardly loved by most farmers and gardeners. I admit to having my own bias against the ghostly Cabbage White due to the larva and my sharing a love of the Brassica family, though I do not ever tolerate or support those that use poisons to control any insects that might damage our food supplies.
The green caterpillars also eat peppergrass Lepidium virginicum and other mustards, so it is a good idea to plant more mustard greens that one would wish to eat. I do not really mind sharing my veggies with most wildlife and so far the whites are not too much of a problem here. Rabbits, however, make growing my own food so very heartbreaking and difficult.
Whites and Sulphurs are members of the same family but have their own subfamily each according to their name. The only Whites I have sighted here are the Cabbage Whites . . . it may be that the non native has caused a decline in the native species. The insane practices of corporate farms and others who manage land with toxic pesticides is most likely a larger factor in all endangered butterfly species.
These butterflies are in flight from spring through fall . . .  having three broods that seem to overlap one another. The Sulphurs are more numerous and confusing to identify as certain later broods seem to look identical. I have included photos from previous years in the collage below.

Orange and Clouded Sulphurs fly about low to the ground in meadows, pastures and fields choosing legumes such as clovers, vetches and alfalfa leaves to fasten a single egg to. I have noted that they choose lupines too. In Massachusetts the Whites and Sulphurs overwinter as fourth instars or chrysalises. 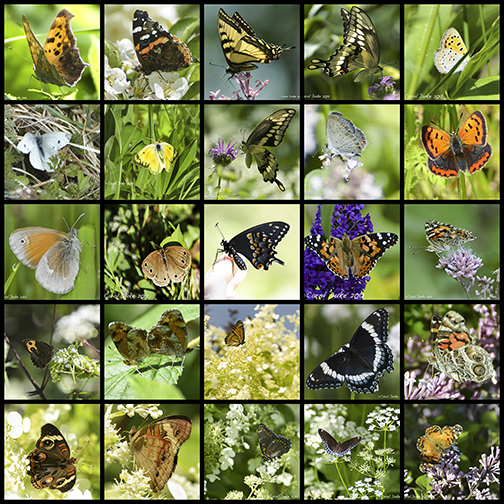 I still have the Fritillary, Skipper and Monarch butterflies of 2012 to share. By next week the gardens should be wide awake with many more returning birds and butterflies awaking with it. It is exciting to imagine all of these beauties and more flitting about the fields and gardens soon. Happy butterflying!

A new installment of my  ‘A Bestiary’ is up over at Native Plants and Wildlife Gardens.