You are here: Home / Butterflies / Gossamer Wings Part Two ~ Blues
The Blues are a subfamily of the family of Gossamer-wings that I particularly delight in. Standing in the north garden or the ‘mini meadow’ below the middle gardens, I will always think of the enchantment of these tiny butterflies and how they hold me captive and in awe of their beauty and frisky frolicking. 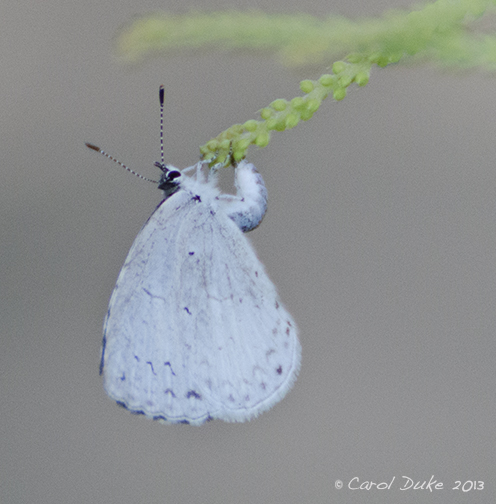 One of the first Blues I sighted here at Flower Hill Farm is the Summer Azure Celastrina ladon. I wrote about the Summer Azure on the Summer Solstice . . .  sharing a wondrous encounter with two azures nectaring on lacy florets of goutweed. To my surprise and excitement one butterfly reveals its fine blue pigment usually held hidden within closed wings. 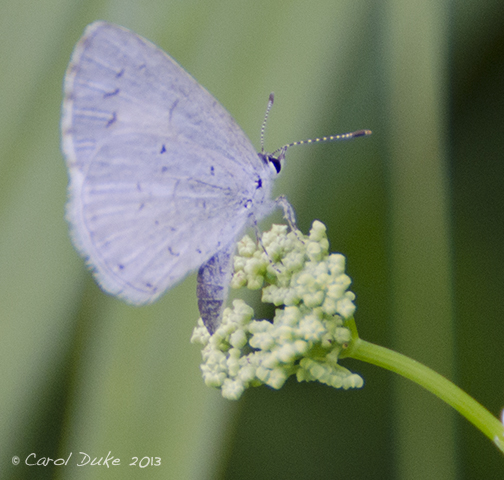 We are looking at teeny scales refracting light . . .  and as that light continuously varies, the eye is filled with a range of values and hues in soft, pale gray-blues. 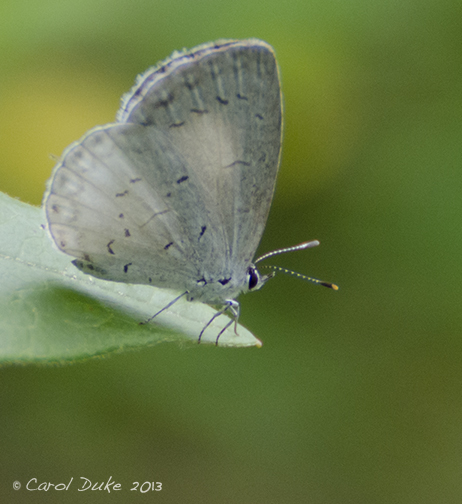 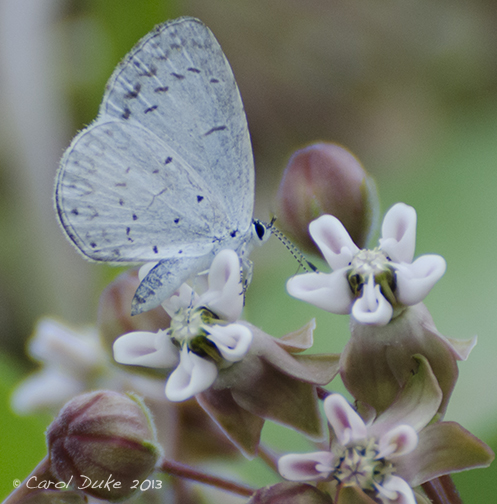 Intricate marks and muted tones touch a tenderness . . . a mindful thread leading into wonderment at such creations. Leaving anthropomorphism aside, the features of these butterflies are precious and somewhat extraterrestrial, though Blues, along with thousands of other species of the Gossamer-wings family, are very grounded on this earth and have been so for a multitude of years. Seen together here with the complex and exquisite beauty of Milkweed florets I am lucky to frame two wild beings in play. 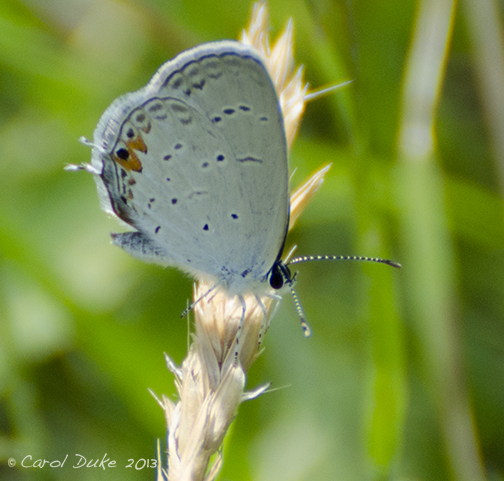 Eastern Tailed-Blue Everes comyntas, is a Blue that wears tails and red eyes. This little guy was along the butterfly path where only feet are allowed to tread this year. I walk over from the lower garden in between grassy areas left to flourish in their wildly way, allowing certain butterflies to thrive, and enter a thin path that runs below a hummock, toppling down from the middle meadow garden, and above the blueberry field.

At the beginning, the land forms what appears to be a mini meadow. . .  and there . . . during June . . .  I was sure to encounter a fellow member of the Gossamer-wings family the American Copper on any day I venture there. Now, in July, I have found these little blues sunning and flitting about in this area and further up towards the end of the path that opens out into the north field. I can walk around the fields and gardens for an hour or more . . . even a day may go by . . . and return to find perhaps the same Eastern Tailed-Blue or another one claiming this little microscopic territory as its own. 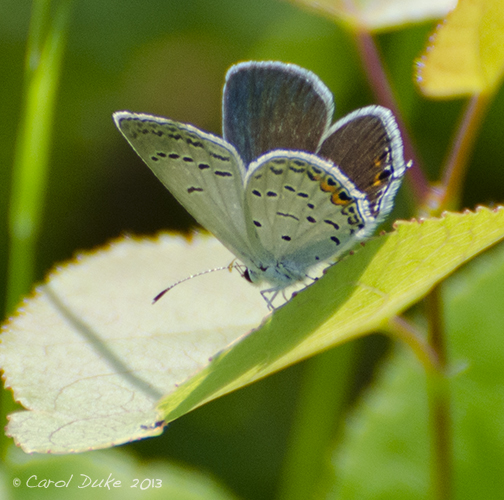 July third and fourth were particularly fruitful in discovering little blues sunning with full wings open. The blues and grays they display are a palette I hope to emulate at a later date. 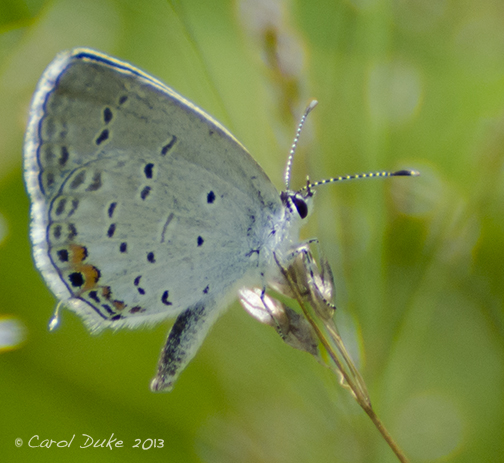 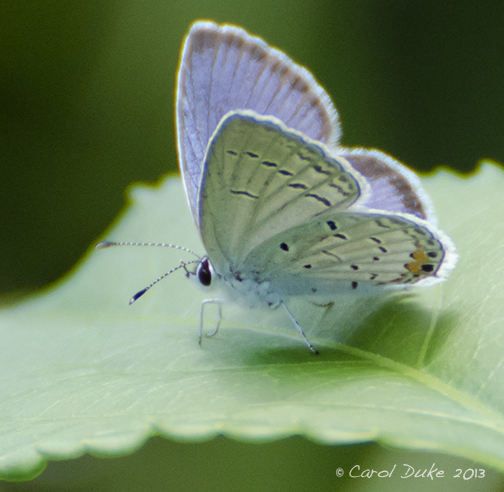 Towering above this small and dainty being, wearing fragile diaphanous wings, as the heavy heat weighs down on my frame, I barely notice any discomfort, but feel grateful for the gentle breeze that soothes the flesh and aids in the drying of these fresh perfectly, fringed wings. 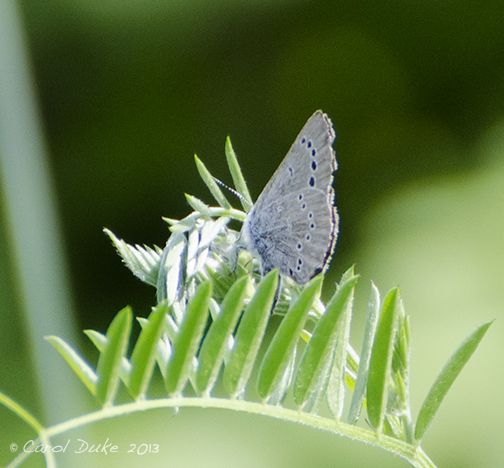 Here a first discovery of a Silvery Blue in our gardens . . . possibly oviposting on Cow Vetch Vicia cracca,  since these “Switchers” have only one brood flying from May through June. As this female was sighted on June 22 , this rather faded and tattered butterfly is in the last days of its flight period. 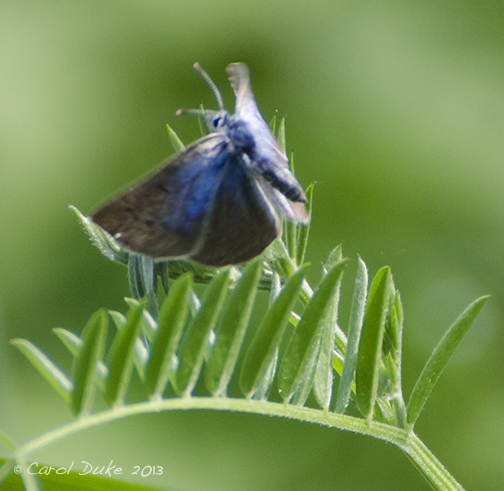 Caught in flight the female exhibits a hint of a different hue of blue. 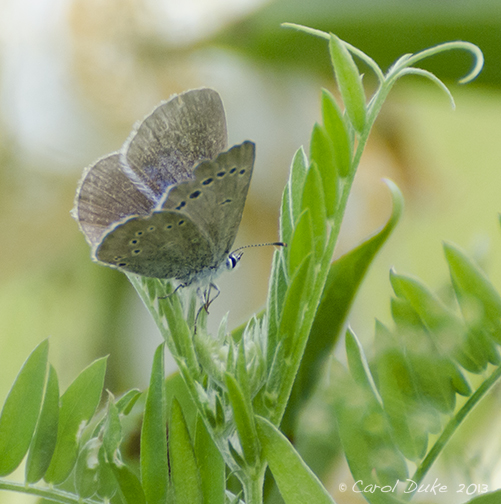 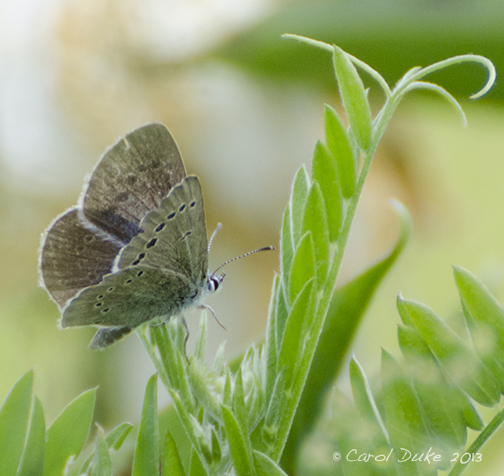 Silvery Blues (Northern ssp.) are called “Switchers” since they are among other Massachusetts butterflies that have switched host plants from a native to a non-native. They seem to reach for the more abundant Cow Vetch. I have now ceased pulling it from the gardens and I hope that the vetch will not become too unruly . . . still you will not hear me kvetch as long as I continue see Silvery Blues and even sometimes Eastern Tailed-Blues, as they too may choose Cow Vetch as a host plant for their young. 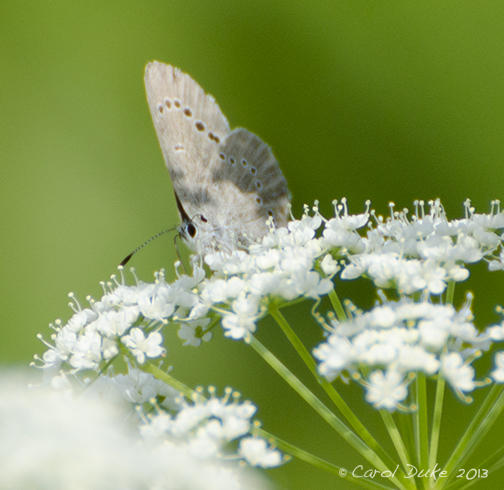 We have the blues here at Flower Hill Farm over many of the invasive non-native plants, but the Gossamer-wings Blues help us make peace with our lot. I can wish that your blues will always be of the Gossamer-wings family kind, though I know it cannot always be so. Still, butterflies can bring such a depth of joy and energize one towards being in nature in a less combative way.

Butterflies only demand a habitat, and by learning what their needs are to survive we may just realize our own potential towards finding another form of happiness through a simpler and healthier way of connecting with the earth.