You are here: Home / Birches / Nature’s Black Knight ~ Raptor of the Dead
Dark as a moonless night, this new world vulture . . .  nature’s silent black knight Cathartes aura, emanates mystery, while evoking macabre images from the minds of many that view him.
Turkey Vultures are truly remarkable diurnal creatures, preferring carrion to fresh meat and purifying our world as they dine. If you were to change the ‘C’ in its scientific name for a ‘K’ you would have the Greek derivative Kathartes meaning cleansing or purifier. Carthartes aura means purifying breeze.
It is hard to imagine our world without Turkey Vultures or vultures of any kind. 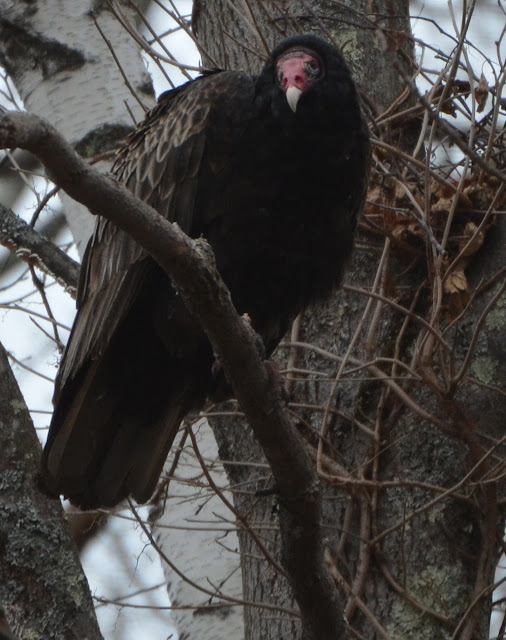 I feel the intent, glaring stare upon me here, but do not fear for I know that these dark lords of the sky do not attack the living. Perhaps it is only a curious stare after all. 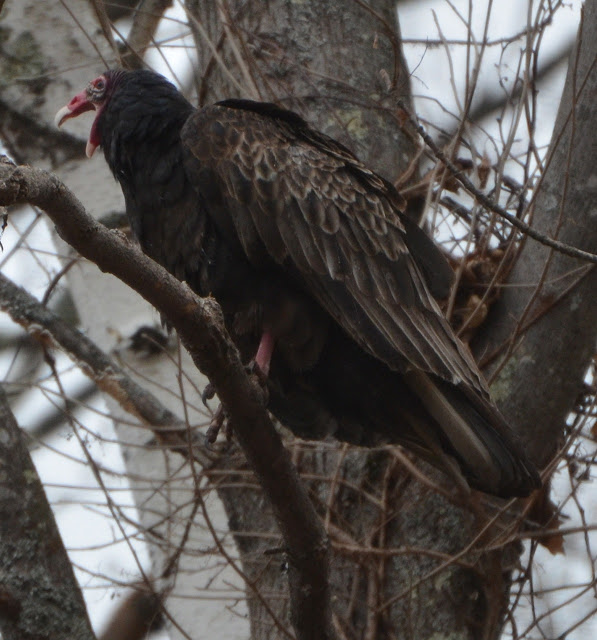 Spring is a time of song but not for this magnificent being, who makes only sibilant sounds . . . a sibilance of hisses . . . air streams emerging from deep within.
This Turkey Vulture is letting me know he or she is annoyed with my approaching too closely in the south field. The sinister sound is meant to frighten me away and the Turkey Vulture seems piqued by my persistence.
They are known to grunt, cough, rattle and if really upset, vomit might spill down upon me.
Singing is out, for they are not endowed with adequate vocal organs.
Smelling is keen however, for unlike other raptors, vultures have super sophisticated olfactory organs. Note the rather large nostrils. 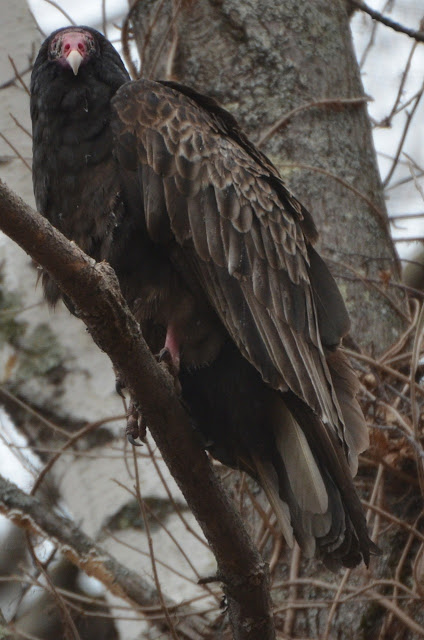 A rapacious raptor . . . perhaps when feeding, but otherwise they get on quite well with one another and can migrate in flocks of up to a thousand individuals. Turkey Vulture roosts are sometimes as large as one hundred.
What a sight that must be and to hear that many hisses at once . . . creepy yet thrilling. 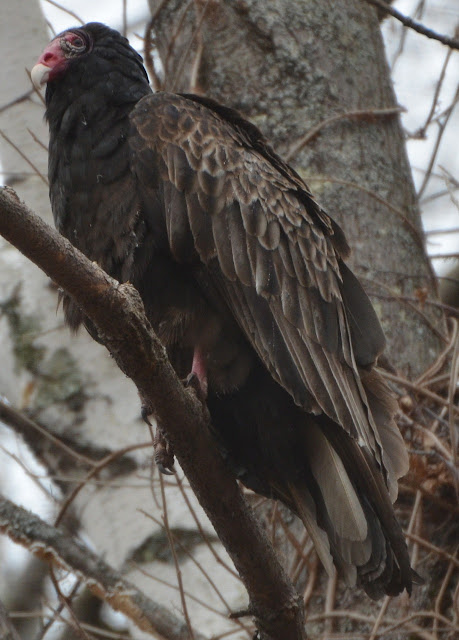 Vulture comes from the latin vellere, to tear, and this princely bird of prey comes equipped with a sharp hooked ivory beak.
I find it very impressive especially as it is not built to kill. 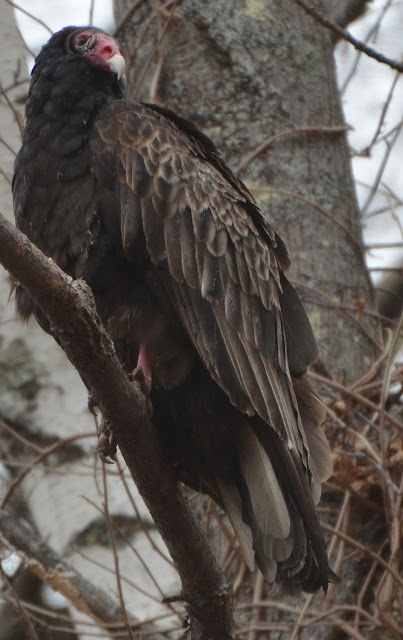 Misunderstood and even mistreated vultures are revered in some cultures where ‘sky burials’ are favored and vultures play a key role in their beliefs for releasing the spirit or soul of the dead. 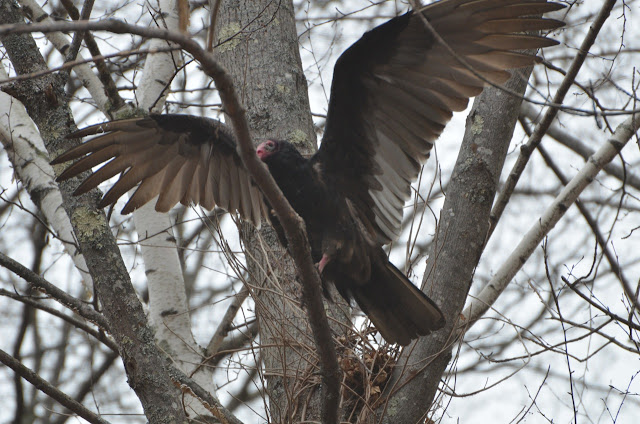 If hisses do not frighten you away . . . here is another way to let you know that I am big and fierce.
This is a WOW experience.
It must be a challenge to keeps ones balance with wings spread up to six feet.
A first fauna encounter after being off the farm for a week and it being suggested that I do not use enough black and gray in my paintings.
I have read that the TurkeyVulture is really more black-brown but being this close up it appears black enough to me.
Never having encountered a perched Turkey vulture before, I feel very lucky to have eyed its large form in a young oak along the south field.
Luckier still that the vulture allows me to approach so closely and take over three hundred photographs. 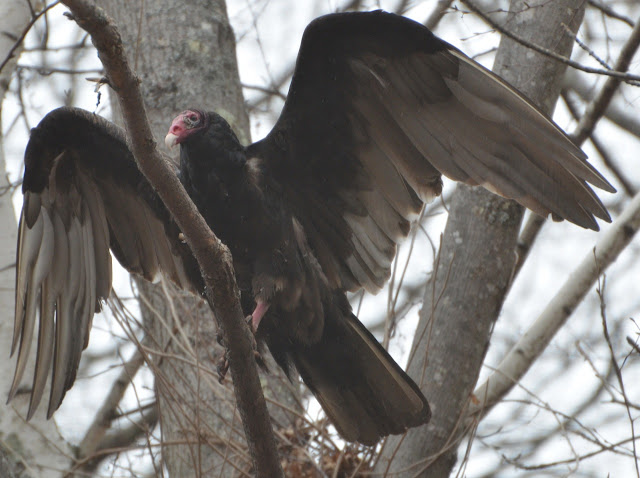 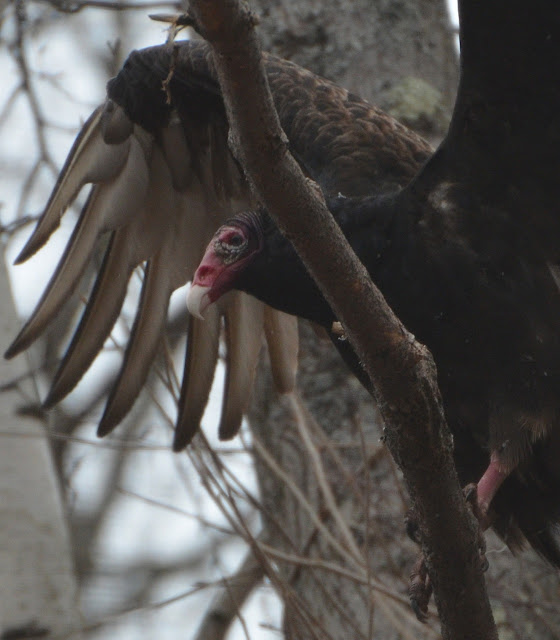 Are you not frightened yet?? 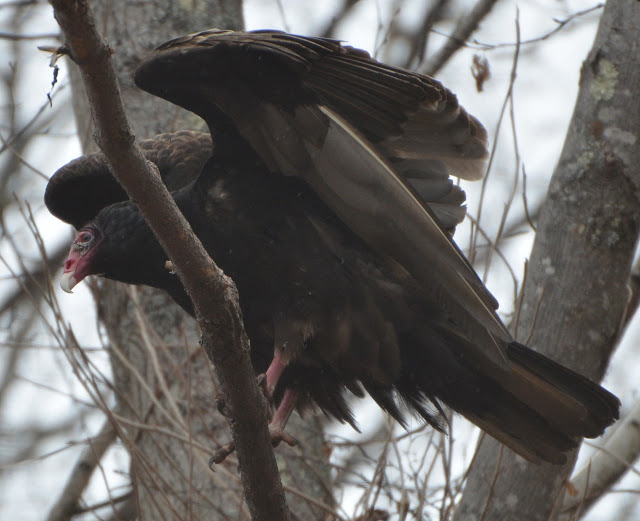 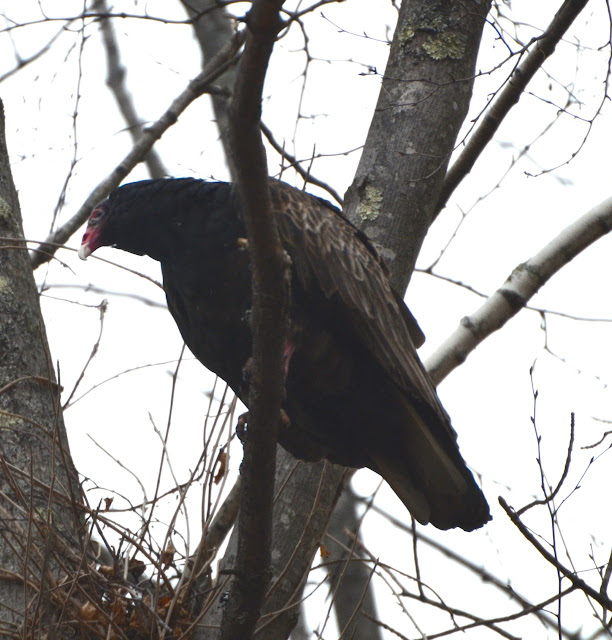 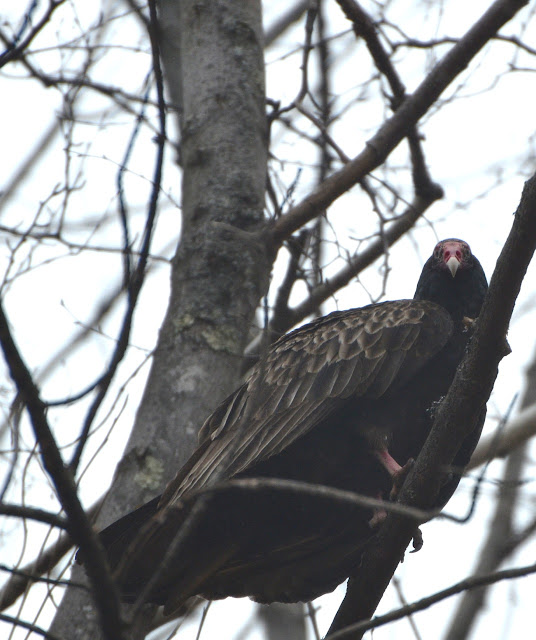 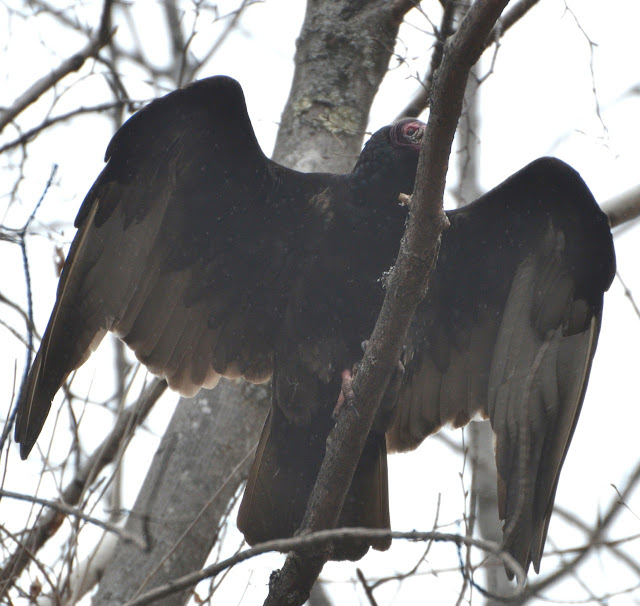 I will be off then . . . to heights you cannot but dream to reach!
Even though I speak kindly and with great admiration for the majestic grace of this Turkey Vulture, he finally spreads his wings for flight . . .  instead of fright . . . and soon was soaring out of sight. 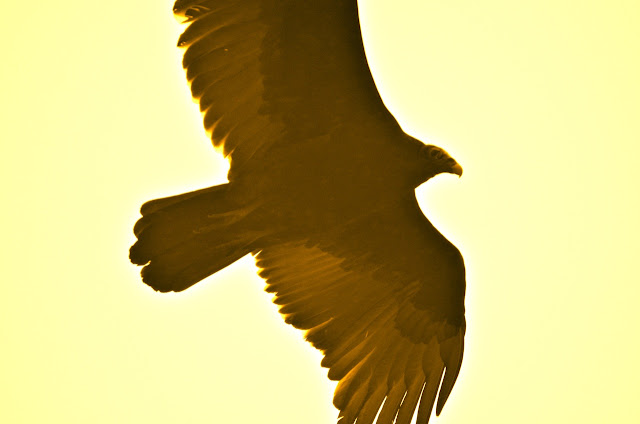 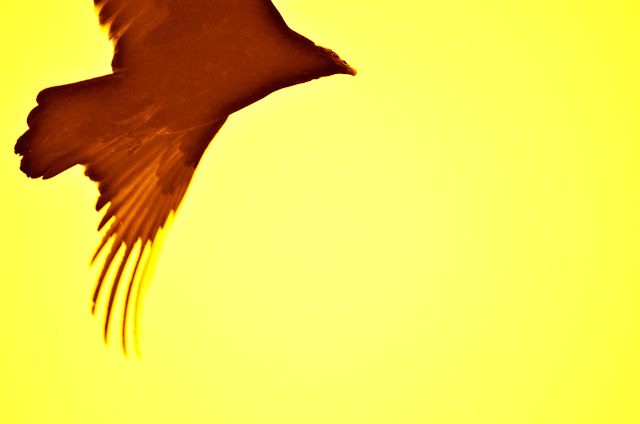 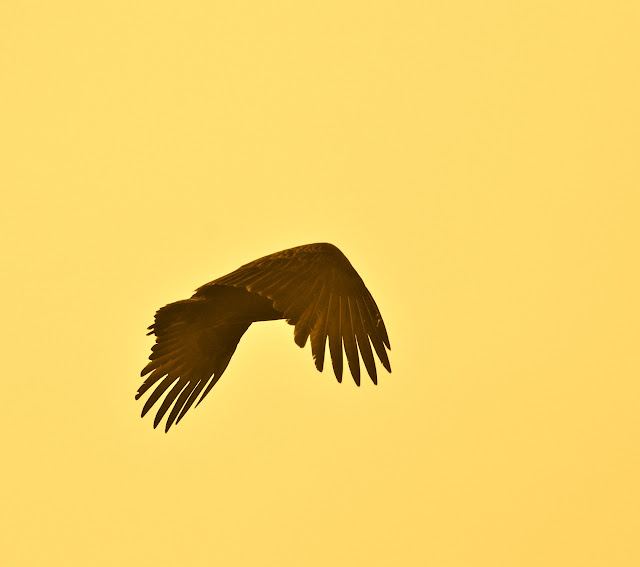 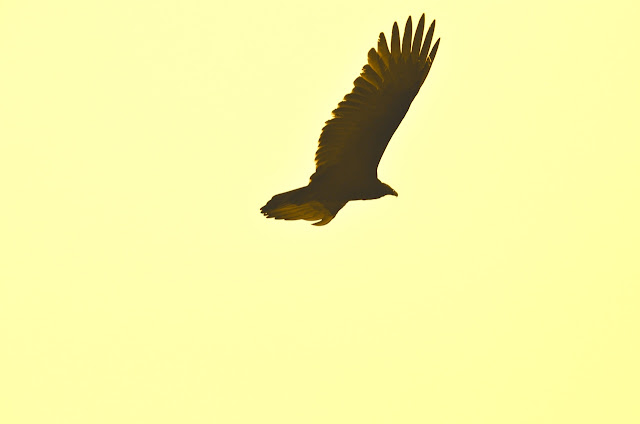 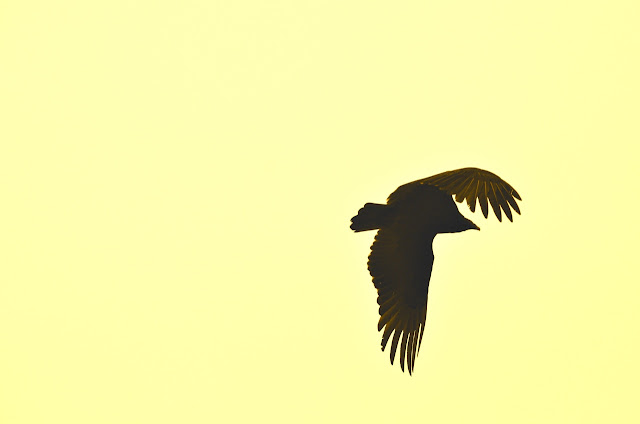 Vultures die when they eat the remains of poisoned critters. Yet another good reason to never . . .  ever use poisons.
All vultures are actually aseptic animals and do not spread disease.
I should love to have an immune system such as theirs . . . these cleaners of our dead keep our world safer and sweeter.
Spring is a sweet time of year and buds are beginning to burst here at Flower Hill Farm.
There is ever mystery in the process.

The Turkey Vulture would not have been moved by flattery from a fox as was a fabled crow, but perhaps you might enjoy my latest installment to my bestiary over at Native Plants and Wildlife Gardens.

Update: April 15, 2012
Another very valuable black/brown creature has returned to Flower Hill Farm . . . I sighted my first bat last night!! Finally the fungus that is killing our bats has been marked as the real killer and hopefully now a cure can be found . . . before it is too late. You can call congress and the white house and demand funding for this important research. I have called and I hope you will too. We do not want to have a world without bats.