You are here: Home / 'Miss Canada' / Back To Cooler Garden Days of June ~ Roses, Mauves, Reds and Bluebird Broods
July has been a sultry mix so far with last night’s “humiture” becoming more bearable or wearable I might say. I find it amusing that a former weatherman and gardener of the name George Winterling developed what we know as the ‘heat index’  . . .  where the temperature of the air and that of the relative humidity are combined to come up with ‘how hot it feels.’ Well, we have all been feeling the heat wave and riding it as best we can.
Back awhile ago, I promised to share the mauves and pinks that were filling the cooler June gardens. As promised . . .  a stroll through mostly the middle and north gardens dressed mainly in greens . . .  with pinks, mauves, reds and splashes of white. I hope to catch up with the July gardens before the month is out. Looking southeast towards the Mount Holyoke Range and middle garden where the Bluebirds are now raising their second brood. Rosa Rugosa, Miss Canada Lilac and Beauty bush frame a tunnel-like space, that birds and butterflies flit through, leading into the middle gardens. 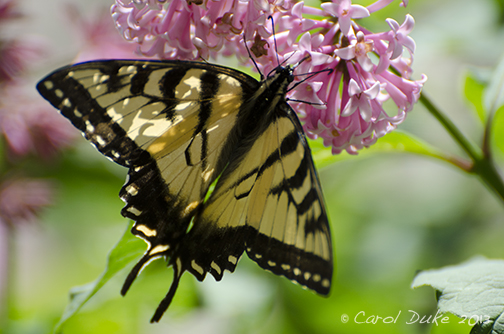 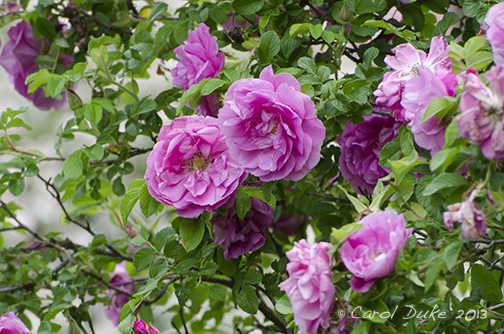 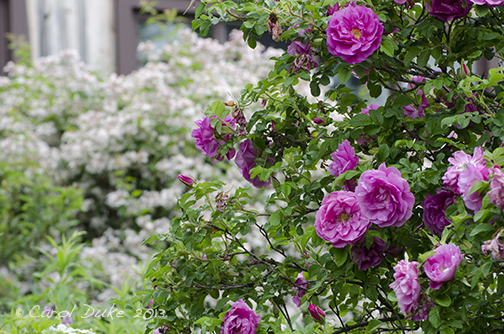 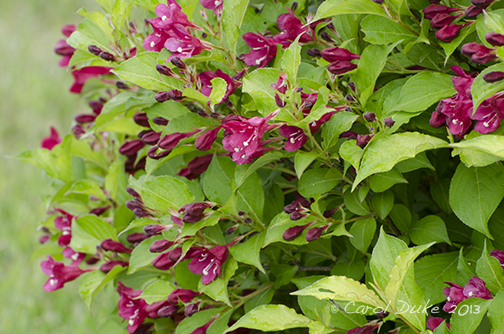 Weigela florida ‘Carlton’ is also called ‘Ghost’ for the way the leaves turn a lighter color in the summer. 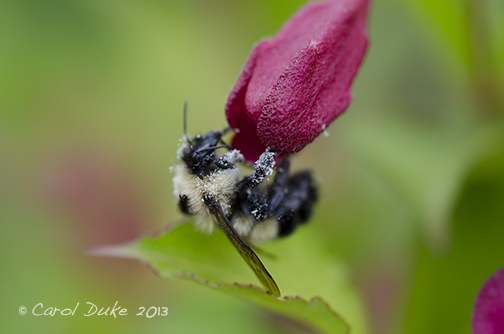 I thought it would be a great plant for the hummingbirds, but I have yet to see one visiting the small shrub. Native bees do enjoy the nectar and will go to the trouble of opening the buds themselves to venture inside. The deer walk right by it and never take a bite. 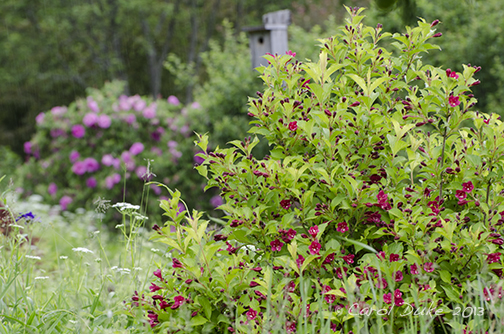 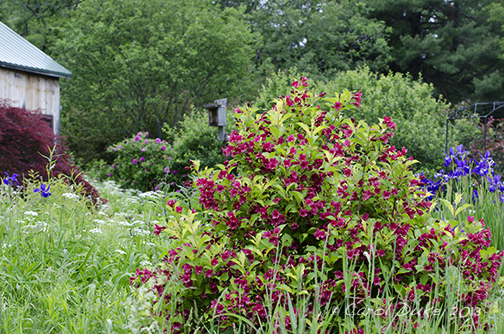 You can see the Bluebird house is open in the photo above. The first brood fledges in mid June and so I remove the front panel of the nestbox, clean and then allow the simple, rustic birdhouse to air out. When the Weigela is in full bloom the bluebirds have fledglings. By mid-July they are busy caring for their second brood in the same nestbox. My cleaning and airing methods met with approval.

Papa Bluebird is an intense or perfervid harvester of caterpillars . . . perfervid is a perfect word in reflecting these steamy hot days. “From modern Latin perfervidus, from Latin per – ‘utterly’ & fervidus ‘glowing hot, fiery'” found in my mac British Dictionary. Can anyone identify the hapless caterpillar?

Little Bluebird nestling peering out at me as I check on the birds June 2nd . . . this is a nestling of the first brood. There had been no activity for days it seemed and concern had me opening the house for the first time ever while there were babies inside. Removing the front panel and portal of the nestbox, I did find a large black spider, with a couple of white spots, looming in the top/back left corner . . . not a pleasant greeting for the entering parents. After encouraging the creepy spider to leave, I close the box again. Activity picks up once more as per usual. 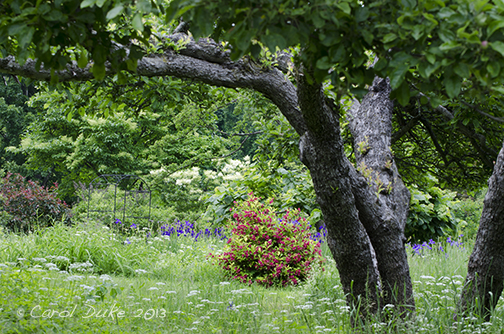 Looking up towards the middle garden and old Apple from the lower garden. 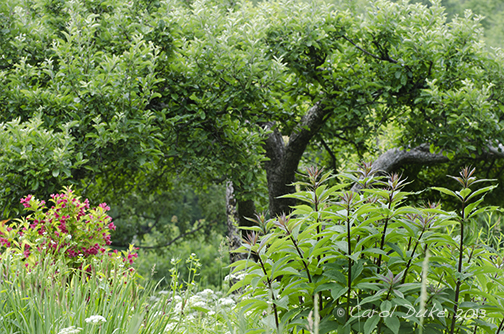 From the middle garden looking towards the Apple and Joe Pye Weed.

The cherry-red blooms of Weigela florida, become cool in the shade while the Gray Birch clump glows in the sunlight creating an interesting contrast. 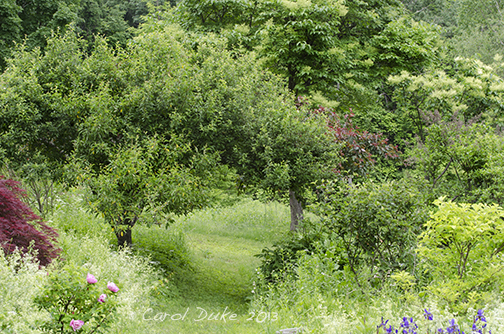 Walking over towards the north garden under the ‘Three Graces’ crabapples. The Japanese Tree Lilacs are just beginning. 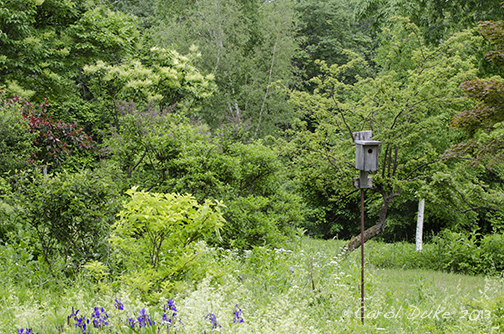 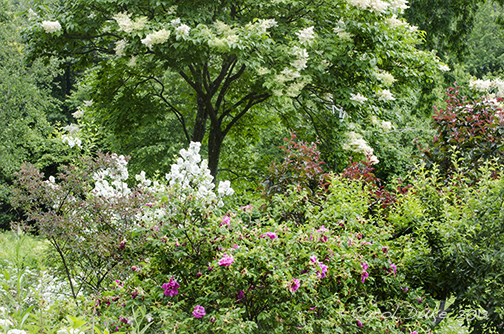 Japanese Tree Lilac with clouds of blooms over Mock Orange and Rosa Rugosa in the north garden. 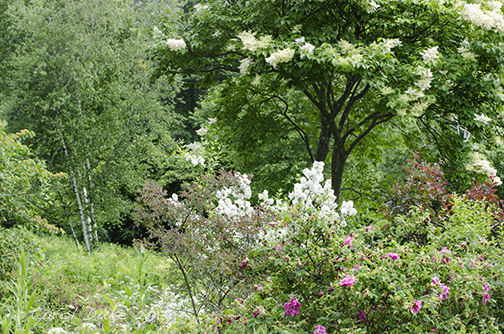 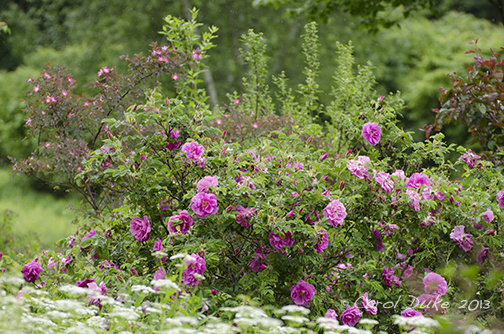 Just a bit earlier the roses were more of a show.
The Mock Orange was only in bud behind the Rosa Rubrifloia ‘Glauca’.
At present . . . late July, the gardens are quite different, though the Rugosas are offering a few second blooms along with the Bluebirds second brood.
I enjoy spending hours in the gardens and fields butterflying and have discovered and documented forty-six species living or visiting here over the years. I am allowing the gardens to just be on their own for now . . . with exception to cutting vines that would otherwise choke out milkweed and other beloved plants.
The next garden walkabout will feature dramatic whites.