You are here: Home / Hydrangea / Details of A Garden Walkabout Indigo Bunting Family and Other Life Forms 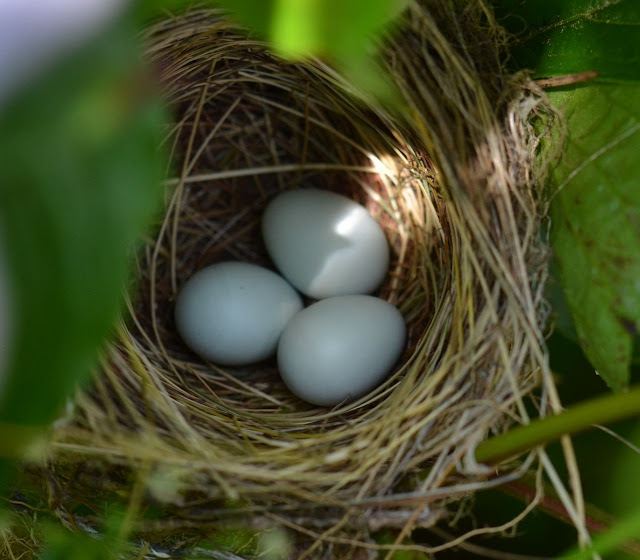 On the last day of my sisters visit in June, Mimi and I were surprised to discovered this small nest hidden within a peony. At the time I had no idea what kind of birds would peck their way out of these white eggs. I looked around and found no parents, so it was impossible for me to determine who might be growing here. 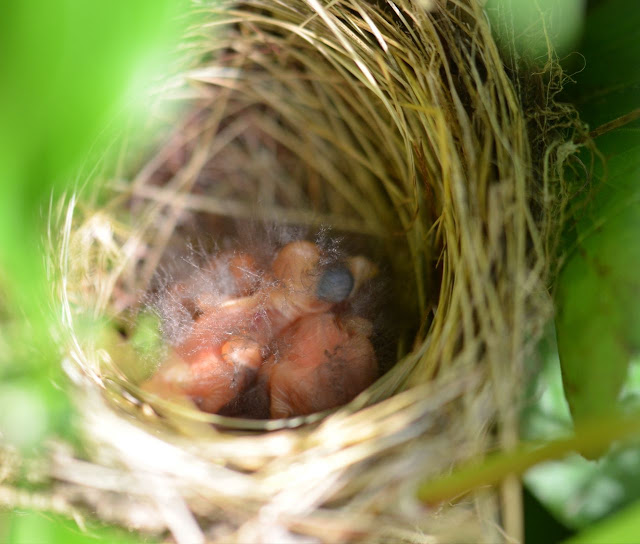 One day old hatchlings . . . still no clue to their names. So tiny and fragile. The nest of mostly soft grasses is only about two feet from the ground. 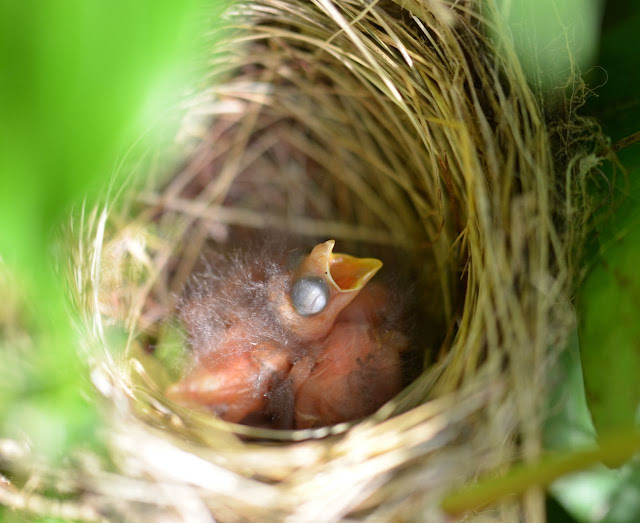 When I carefully moved a leaf the baby thought its parent had arrived. 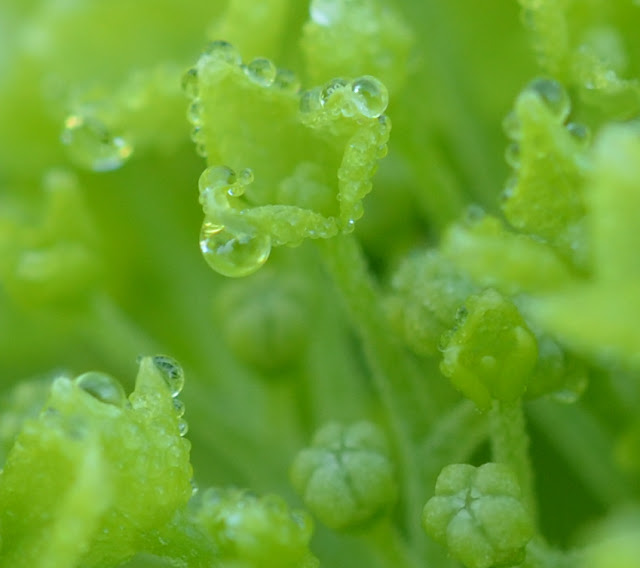 I often look upon gaping mouths and unfurling buds in a similar light. Both are opening for nourishment and continue to grow day by day. 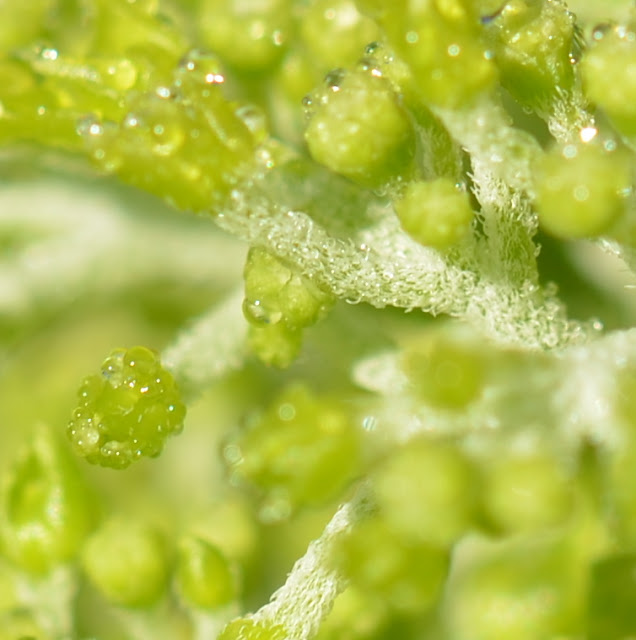 Both plant and animal life start out in tiny forms. 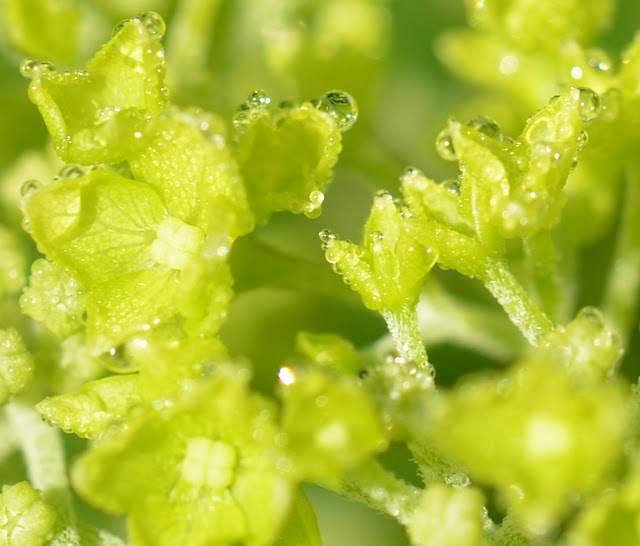 Stretching towards the sunlight with opening cups . . . 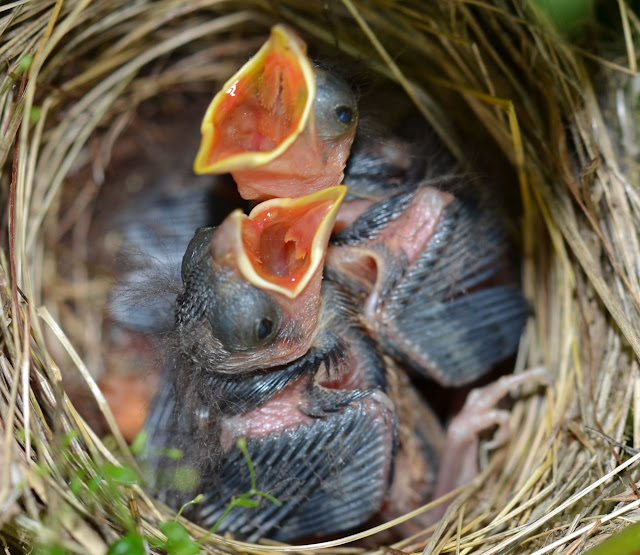 With each passing day true colors of leaf or feather may emerge. 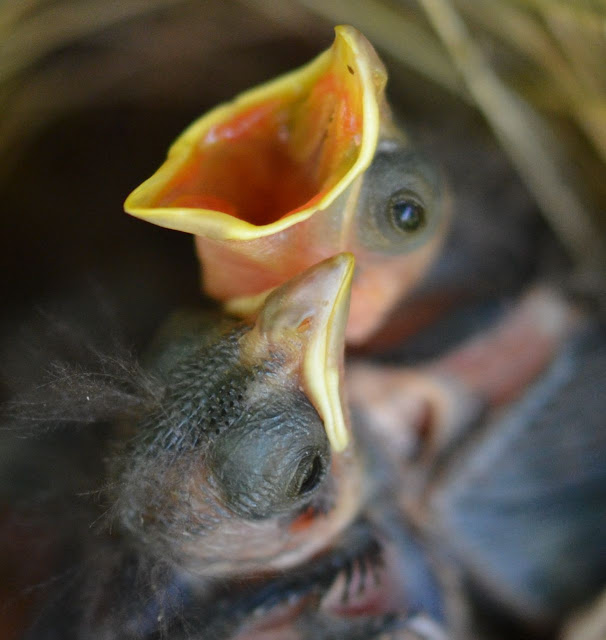 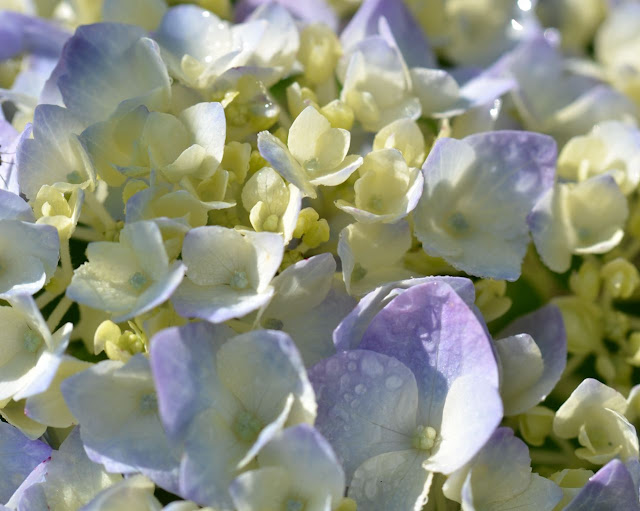 Water and sun are absorbed from these forming corollas. 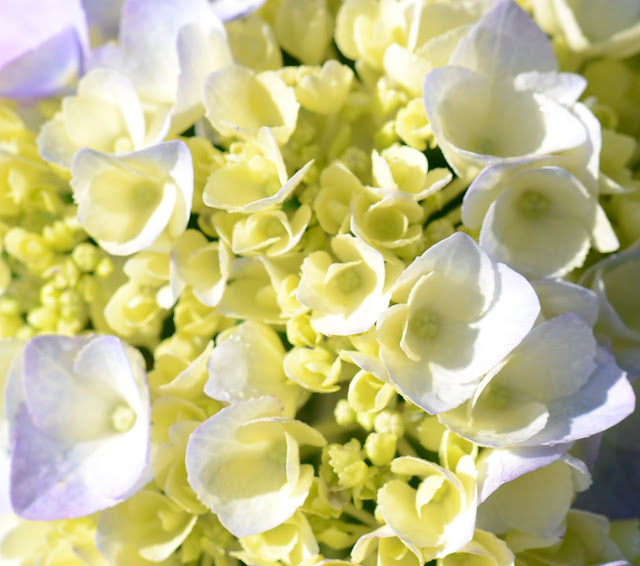 Other nutrients are transported into petals via veins reaching deep down into roots anchored in rich loam. 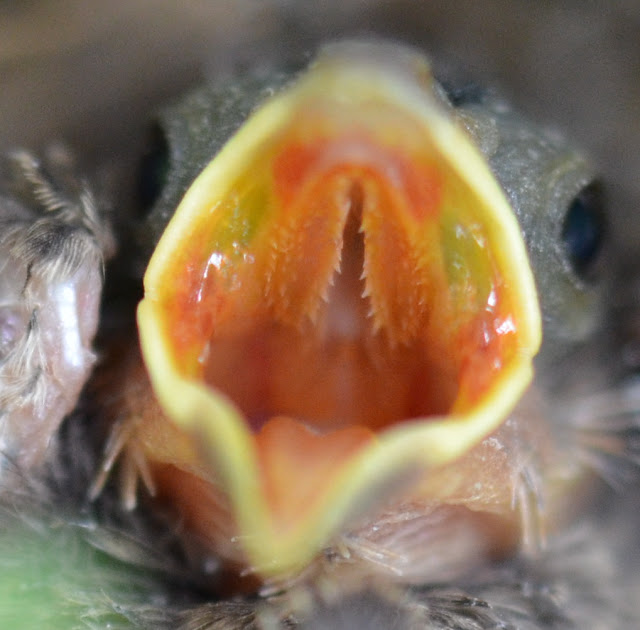 Animals must partake of most offerings with open mouth. 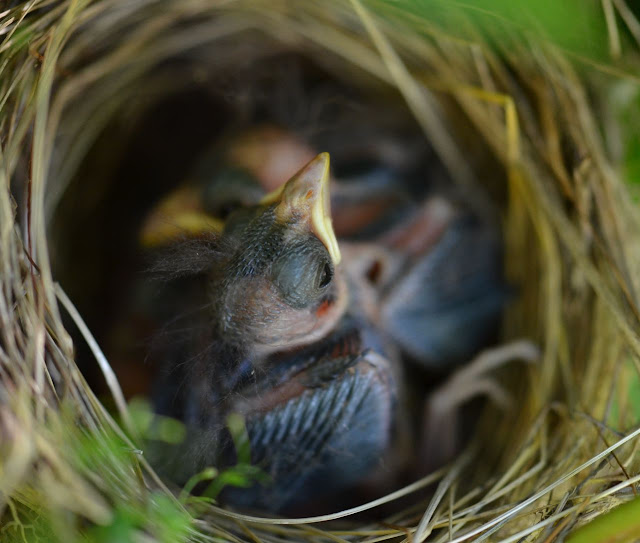 I begin to think the parent is a female Indigo Bunting I see hiding in a nearby Viburnum. That would explain the beautiful blue. Luckily there was no Cowbird egg laid in this nest.
What pretty little nestlings Indigos are. 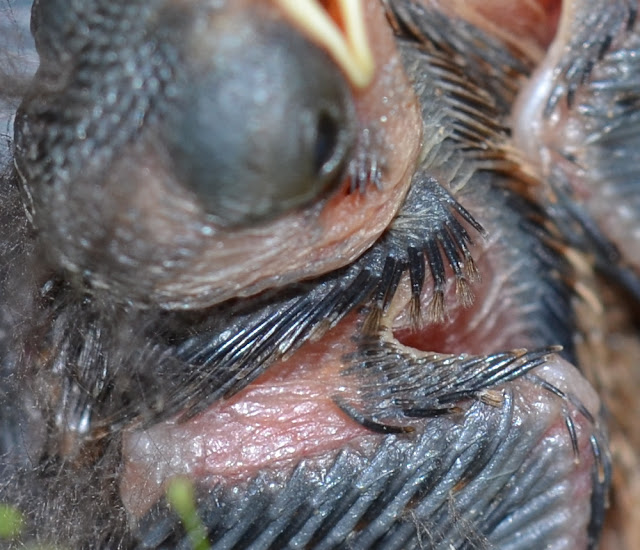 The forming of feathers is fascinating. 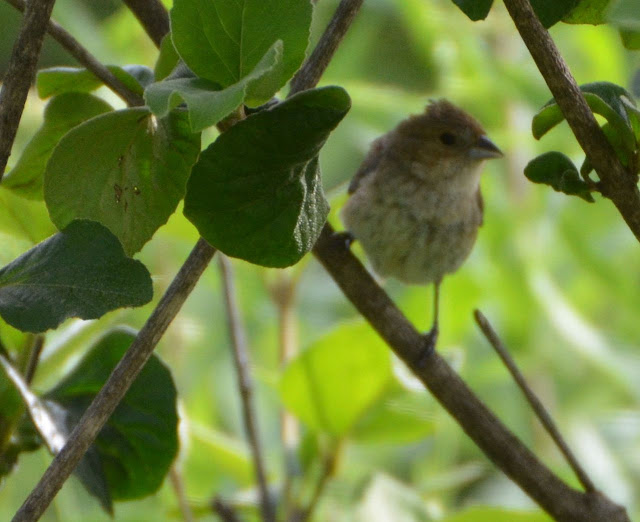 The babies do not mind my visits but perhaps the private parents do. I only take quick peeks in order to respect their privacy and not to draw attention to the nest. 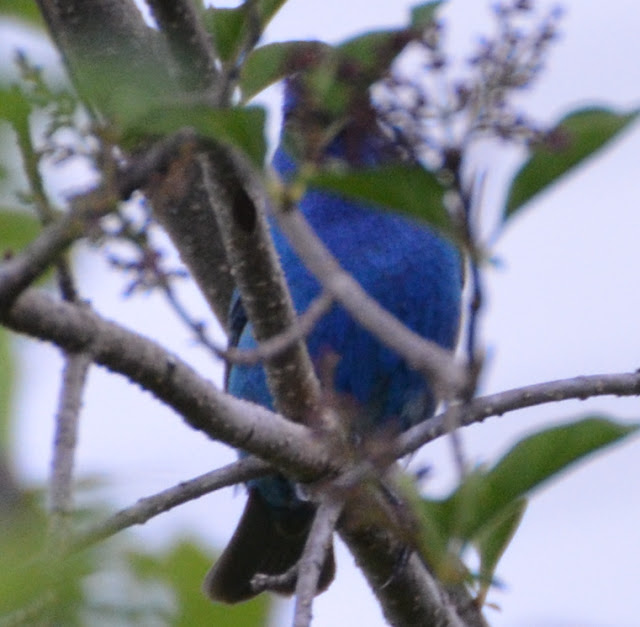 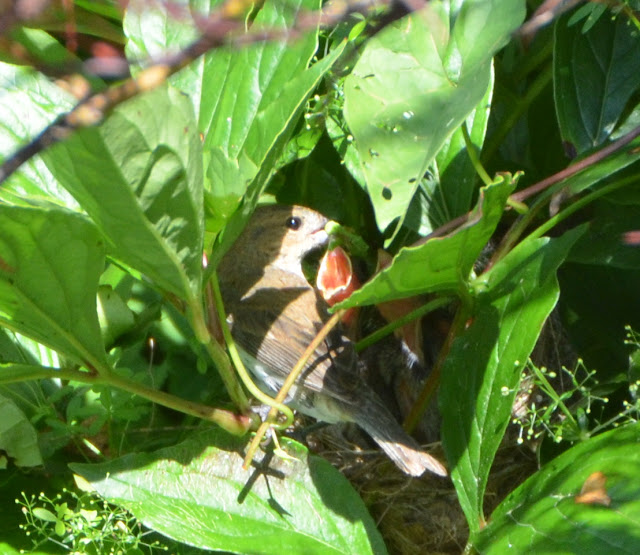 The female did not like my seeing her going to and coming from the nest. She is looking directly at me in the photos and does not seem happy. I am always careful not to go close to the nestlings when the parents are about. They never call out in alarm nor do the babies seem frightened by my fleeting visits. I am standing a good fifteen feet away, while taking this photograph of the female Indigo Bunting about to feed an eager nestling. 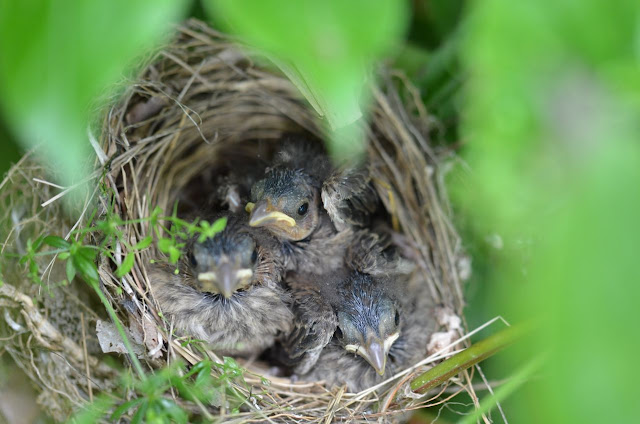 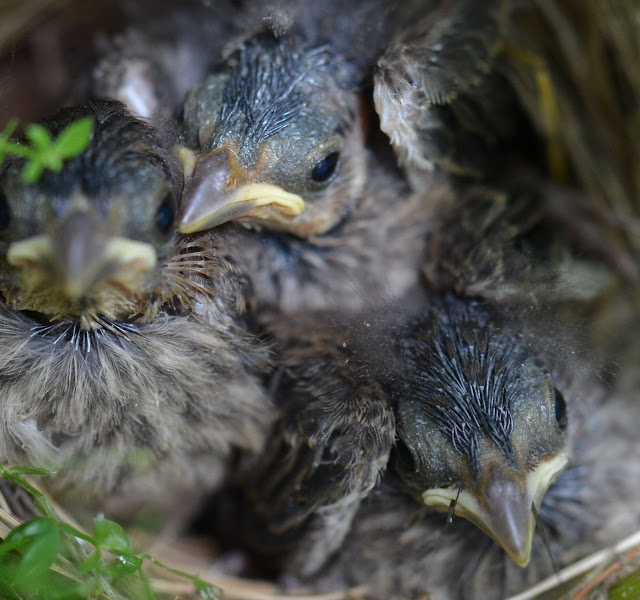 The little one at the bottom right seems to have  a dragonfly stuck in it’s mouth. I am surprised the mother did not take off the wings. The feathers around the neck of the nestling to the left are full and fluffy. 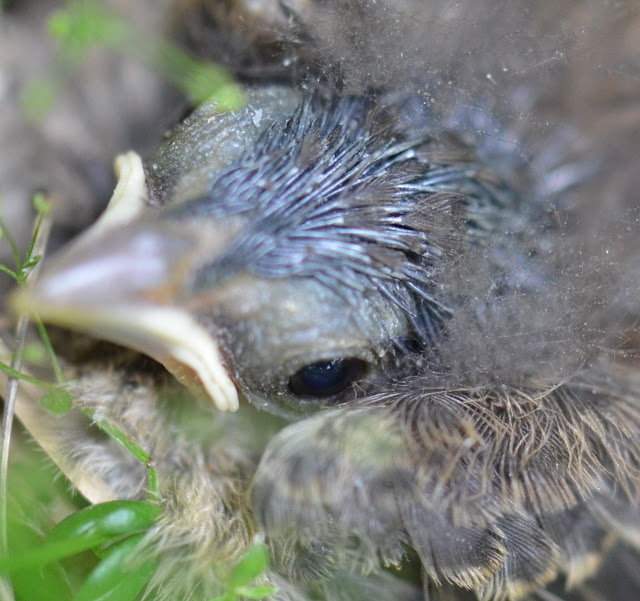 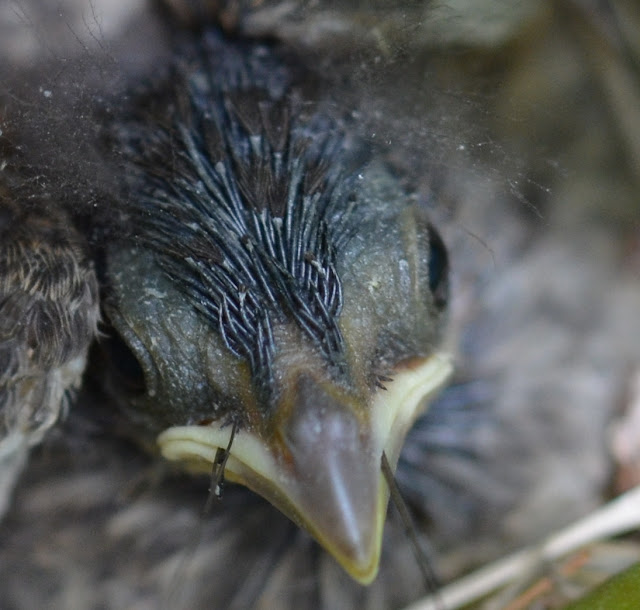 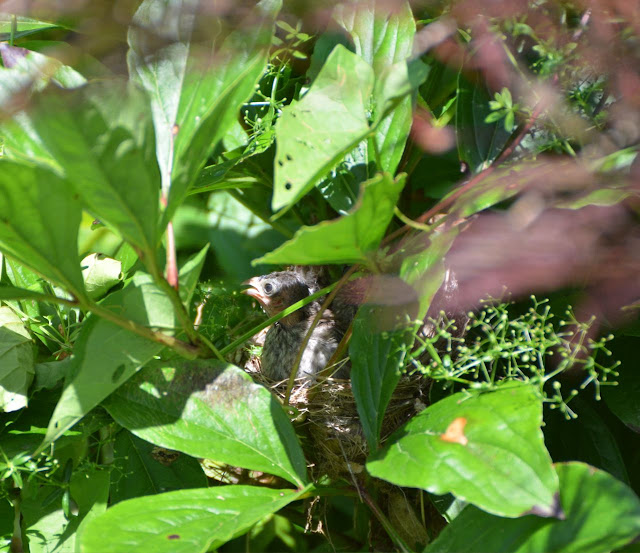 Here is how the nest and nestling can be seen in full sun. Note how the little creature has its mouth open, seeming to breathe heavily. I cannot help but wonder how it is they survive, being in such a vulnerable setting. This photo was taken more than six feet away from the nest. Before I knew the nest was hidden within the peony, I had a helper cut a path right up to it. The plants we cut had offered a buffer or wall of green concealing the nest better. I will be more careful in future. Plants are vital for the life of all animals in a multitude of ways. 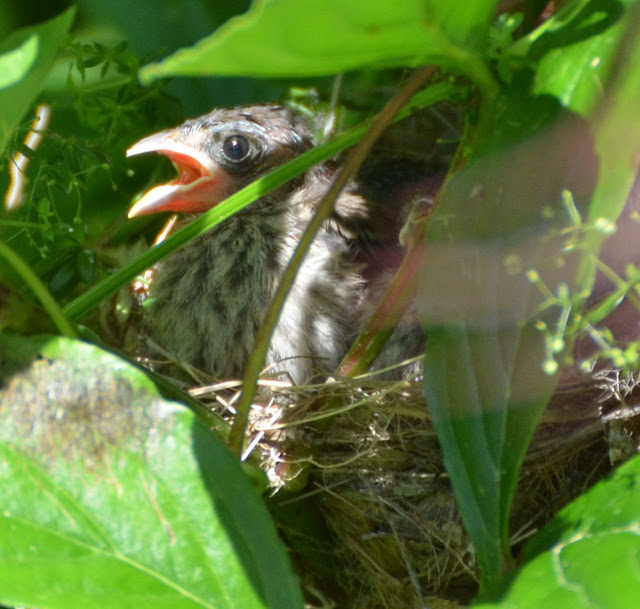 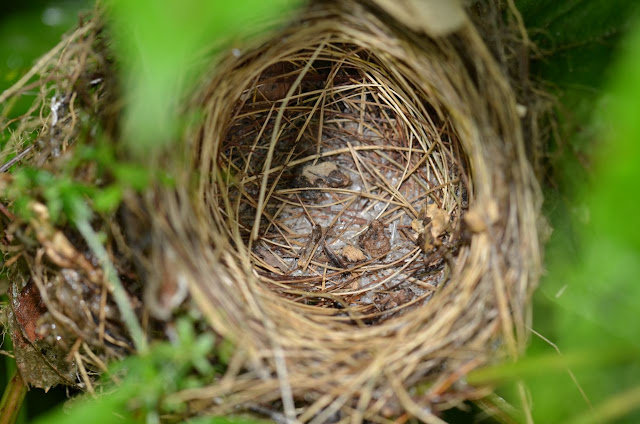 Just the day after taking the photo of the female Indigo Bunting, I found the nest empty. A wise and caring mother must have felt it was time to get her offspring to a safer place. I gasped, when first seeing the nest deserted, thinking something had robbed the Indigo Buntings of their family. Later, after reading that the nestlings will fledge early if the parents are concerned or something disturbs the nest, I understood. Though it was just about the right time for them to fledge . . .  within a day or two . . . I hope it was not my coming so close that caused this early vacancy.
I have not seen the fledglings since or perhaps the one I saw yesterday atop a small tree near the blueberry field was a young male.  I do hear the adult male singing during the day. I hope the young buntings are out in the garden somewhere enjoying the blueberries along with all the other mature and juvenile  birds. Hopefully I will be blessed with another peek soon. 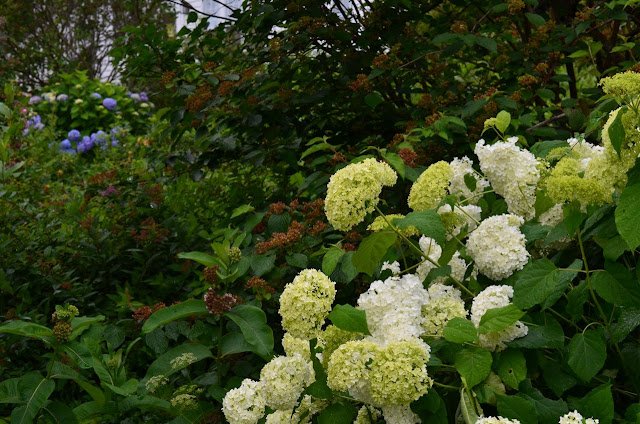 We cannot know what precious living beings might be tucked away within our gardens. During nesting seasons, it is important to survey an area before weeding or cutting, so as not to remove protective covering for helpless nestlings. As the hydrangea in the foreground was forming, baby catbirds were growing inside its lush green cover. The Indigo Buntings were nesting just to the left of the blue hydrangea, next to a Japanese Maple mostly protected by the large green leaves of a peony.
Knowing that songbirds nest in “weedy” areas only confirms the importance of a lifetime commitment to never using any chemicals on my land.
I shudder when seeing fields being cut this time of year. If only we could understand, respect and share the land with other creatures . . .  honoring the seasonal cycles of all life.
I have a new post over at Native Plants and Wildlife Gardens